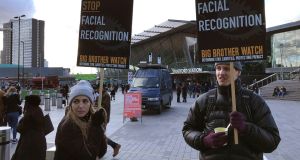 Brussels has backed away from plans to call for a five-year blanket moratorium on the use of facial recognition technology in public spaces, instead leaving the responsibility of choosing to impose a ban to member states, despite concerns from privacy groups that civil liberties could be infringed by the biometric software.

In a draft of a paper on artificial intelligence to be published next week, the European Commission finds that facial recognition is prone to inaccuracy, can be used to breach privacy laws, and can facilitate identity fraud.

However, unlike the previous draft, the paper no longer includes the suggestion that the commission should consider a blanket moratorium of five years – a period during which states could study the technology’s impact before rolling it out in public spaces.

Instead the latest draft puts the onus on individual member states to assess how and when they wish to permit the use of facial recognition. It recommends that independent bodies be used to assess each proposed public use of the technology.

The change of tack comes as regulators and corporations worldwide are calling for clarity on the use of facial recognition. US cities such as San Francisco have imposed time-limited bans on the police use of biometrics, while the technology has been challenged in UK courts – though it was approved for use in live settings by London’s Metropolitan Police last month.

In Sweden, the data protection authority imposed its first fine under the new General Data Protection Law in August on a high school that was using facial recognition to record student attendance.

The plans emerged as Margrethe Vestager, the commissioner in charge of the EU’s digital policy, said more funding was needed to properly execute the bloc’s ambitious agenda on artificial intelligence.

In an interview last month, she said: “When considering AI and Europe, you need funding because member states are not investing a lot in artificial intelligence.” The EU wants to draw in more than €20 billion in funding per year to develop artificial intelligence over the next decade, according to the document.

An earlier draft of Brussels’ plans for AI, published last December, had warned that a ban on using facial recognition could stifle innovation in the sector. “By its nature, such a ban would be a far-reaching measure that might hamper the development and uptake of this technology,” the paper read.

People with direct knowledge of the EU’s consultation process over the AI policy proposals warned that the regulation of facial recognition has become a “divisive debate”.

A person familiar with the earlier draft also said the proposal had never been seriously discussed between the commission’s different services.

“The early draft floated the idea of a full ban, which is very popular among civil rights campaigners worried about abuse,” another person with direct knowledge of the discussions said. “But the security community is against the ban because they think it’s a good tool.”

People following the discussions said a case-by-case ban and further scrutiny of facial recognition technologies was probably “the landing zone” of the commission, but warned discussions are still ongoing and that changes can happen until the very end.

Despite the changing views in Brussels, it is expected that individual member states will continue to introduce their own regulatory frameworks at a national level.

For instance, the French data protection authority said in October that the use of biometric technology in schools does not comply with privacy law, while German authorities have also recently backtracked on deployment of the software by police.

“Sounds like the European Commission has got cold feet, and I am appalled,” said Stephanie Hare, an independent researcher and campaigner who focuses on biometric technology.

“We are apparently willing in the name of profit to risk individual civil liberties and human rights.”