Competition for start-up businesses launched by Ireland Funds and NDRC 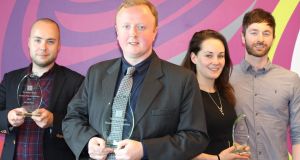 The Ireland Funds, in partnership with the State-mandated NDRC, has launched its annual “Business Plan Competition”, which offers funding and mentoring to entrepreneurs under the age of 35.

Now in its sixth year, the competition is accepting entries until June 13th from students and recent graduates from the island of Ireland who have technology proposals that are at pre-investment stage.

Up to 10 individuals or teams will be selected to take part in three days of workshops, bringing their business ideas from concept to pitch, while receiving mentoring and feedback throughout the process.

There will be a final pitching event and three prizes will be awarded. The winner will receive a €10,000 cash prize and the opportunity to pitch for a place on an NDRC investment programme. Second place will receive €5,000 while third will get €1,000.

Bill McKiernan, the president at WSM Capital and founder of CyberSource, who is funding the competition, said Ireland boasts a “thriving start-up scene, with initiatives popping up” across the country. He said the competition would “hone skills” among budding young entrepreneurs.

NDRC commercial director Gary Leyden said the competition was a “great way” to stimulate individuals and teams who “may have a good idea but are not sure of its potential”.

Sothic BioScience won the competition in 2016 and has since been travelling around Europe meeting investors.