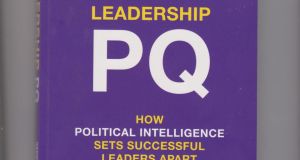 They define this as the leadership capacity to interact strategically in a world where government, business and wider society share power to shape the future in a global economy.

Traditionally this role is performed by the public affairs manager or external consultant but the authors maintain that the complexity of stakeholder relationships means that this is a function that cannot be vested in a single person or small group.

Those responsible for business in foreign countries, responsible for the design and development of new products, and those leading on tax, finance and corporate responsibility and executive and non-executive board members all have to exercise politically intelligent leadership.

Following research with leaders in multinational companies and in government, the book advances a best practice model for PQ.

This stresses the need for innovation as complex problems won’t be solved by existing practices, international coordination as cooperation across borders is vital, a longer-term approach as meaningful change takes time to embed and ethics as people need to trust in leaders to commit to change.

It follows that leaders whose focus is on delivering solutions with these characteristics are most likely to earn the trust and confidence of citizens, consumers and customers because they offer solutions to big problems.

The book emphasises how the nature of power has changed in recent times as the world itself has changed. The drivers underpinning that change – including politics, economics, technology and the environment – all move us further into mutual dependence.

No single organisation, be it a government or corporation, is in full control of its destiny. Governing nations, making profits or providing public services and helping society are done more effectively when organisations work with others.

Business, government and non-profit organisations raise their game when they embrace working with partners and stakeholders to achieve what they want individually and jointly.

Belief in the supremacy of large multinational corporations over national governments was shattered in the aftermath of the 2008 financial crisis when pure market-led economics was exposed, the authors assert. The market relied on politicians and central banks to provide the tools to restore confidence in the broken system and this exposure of mutual dependency between the market and government has led to a more equal balance of power than many expected.

Shared power brings opportunities for innovation, diversity, scale and significant reform. Conversely, it also results in complexity, competing interests, politics and misunderstanding. The challenge is for leaders to maximise the opportunities and overcome the difficulties.

How PQ leaders interact with others determines how much influence they exercise. In a shared power world, you need to facilitate partnership and engage stakeholders to deliver long-term benefits for society as well as profit, economic growth and funds to operate.

A good starting point is effective stakeholder mapping. You need systems in place to identify the people who exercise real influence in each stakeholder group. This is not just a matter of picking out the top names by job titles but also involves working out the less obvious power brokers and influencers.

As the authors note, when Tony Blair became British prime minister in 1997, a number of senior government officials saw Alastair Campbell, the press secretary, as an official who briefed the media. Others, more quickly and astutely, recognised that he was a key source of influence on the prime minister.

With a good selection of case studies to back up its key points, this is a thoughtful and well-researched book on a key facet of leadership.