Ford focuses on mobility as it seeks to future-proof itself 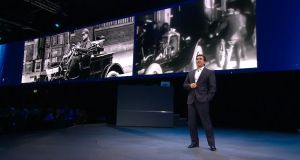 Ford chief executive Mark Fields speaking at the Go Further presentation in Cologne: he reckons we’re on the cusp of a mobility revolution

The headlines may have been about Fiesta, but Ford’s Go Further presentation was about much more than the latest supermini. This is the blue oval brand redefining itself for the upcoming revolution. In fact, for the upcoming generations.

“Our long-term vision for Ford is not just about selling more cars,” explained chief executive Mark Fields to an audience of 2,500 in Cologne. “Now that’s still very very important, but our overall long-term vision is also about making people’s lives better, by changing the way the world moves, just as our founder Henry Ford did more than a 100 years ago.”

Fields reckons we’re on the cusp of a mobility revolution and to that end Ford is no longer only an auto maker, it is now an auto and mobility company. Ford is future-proofing itself.

The notion of personal mobility and car sharing – where the lines of car ownership are blurred – were high on the agenda. Fields threw out some big numbers: “The traditional auto industry generates about $2.3 trillion in revenue per year whereas transportation services are worth $5.4 trillion.”

He stressed the importance of Ford’s Smart Mobility initiative, an example of which is the shuttle van start-up Chariot. Ford recently bought the innovative San Francisco firm for a reported $65 million.

Chariot can best be described as being like Uber but with 15-seater Transit people carriers. This car pooling of sorts began in the Bay Area. It was inspired by the over-stretched public transport system and subsequently has expanded to Austin, Texas, and a further four US cities are in the planing stages to go live in the next 14 months.

The routes travelled are based on passenger demand and are flexible thanks to the use of data algorithms and other electronic dark arts that allow real-time scheduling.

Closer to home, Ford wants to make finding parking easier. In the United Kingdom, it’s trailing an app that can alert users to empty parking spaces while also interpreting the specific local council’s parking by laws, which can be baffling to humans. In the United States, even cyclists look set to benefit as Ford looks to integrate its Ford GoBike bicycle-sharing scheme via its FordPass app by 2018.

Meanwhile, with all eyes on the electric dream, Ford has just signed a memorandum of understanding with Audi, BMW Group, Daimler AG, Porsche and Volkswagen to roll out 400 high-speed DC ultra-fast CCS electric-charging points on all major highways throughout Europe.

This will potentially allow 63 million vehicles to charge annually. Fields said Ford is investing $4.5 billion in electrified solutions by the end of the decade and introducing 13 new electrified vehicles to its global portfolio.

As for autonomous cars, in 2017 Ford will begin testing on public roads in Europe. By 2021 autonomous Fords, used in a ride-hailing or ride-sharing service, will be a reality.

The Go Further event itself was an attempt to showcase the scale of Ford’s endeavours, from the Model T to the latest GT40. Yet it wasn’t about nostalgia, nor simple the arrival the new Fiesta. It was about a belief in its future.

We were told about one new partnership Ford has developed with German firm Nirenberg Neuroscience. The company specialises in artificial intelligence and has developed a neural code that can help restore people’s sight. The code has been adapted and applied to Ford’s self-driving cars. Vision of the future anyone?

Authentic and walk-in ready in Kilmainham for €625k
2

‘I’d like to start my own business in Ireland, but not by the back door’
4

Shame-free sex education: It’s So Amazing! And only a little bit mortifying
8

Expert tips: A dentist on toothcare
9