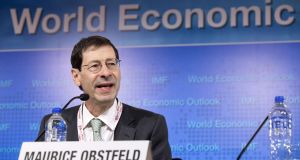 The world economy will this year grow at its slowest pace since the global financial crisis, the International Monetary Fund said yesterday, with a deep slowdown in China and other emerging economies masking a strengthening recovery in rich countries. Ireland was identified as one of the few growth bright spots in Europe in the IMF outlook.

2015 will mark the fifth consecutive year that average growth in emerging economies has declined, the fund predicts in its twice-yearly world economic outlook. This drag on global growth is sufficient to pull it down to 3.1 per cent this year even though advanced economies will post their best performance since 2010.

With downgrades to its growth forecasts, the fund called for countries to redouble efforts to boost domestic spending and reform their economies to improve the potential for expansion.

There was not one specific cause of the global economic weakness, the IMF said, although the slowdown in China and its realignment towards consumption and services compounded pain for countries which export oil and metals.

Instead, the fund said the weakness reflected common longer-term forces slowing the potential for growth in many countries, including lower productivity growth, high public and private debt levels, ageing populations and a hangover from post-crisis investment booms in many emerging economies.

The fund has cut the global growth forecast for 2015 from 3.5 per cent in April to 3.1 per cent with a gradual recovery in the years ahead as it expects the faster growing emerging economies to recover and continue to account for the lion’s share of global expansion.

In a move that will surprise many analysts, the IMF has not downgraded its forecast for China, despite the stock market crash, its August devaluation and policy U-turns which suggested the country’s economy was more troubled than official figures suggest.

The IMF expects 6.8 per cent growth in China for 2015, moderating to a rate of 6.3 per cent for much of the rest of the decade.

Growth in the US was weaker than the fund expected in April, reflecting the bad first quarter, but the fund expects growth to pick up from 2.6 per cent this year to 2.8 per cent in 2016 even if the Federal Reserve begins to raise interest rates.

The forecasts held up in the euro zone with “stronger then expected growth in Italy and especially in Ireland and Spain offsetting weaker-than-expected growth in Germany,” suggesting that Greece no longer has the power to derail the rest of the single currency area.

The IMF is forecasting Irish GDP growth of 4.8 per cent this year and 3.8 per cent next year, well below recently upgraded official forecasts of 6.2 per cent and 4.2 per cent in 2016.

In emerging economies, the bright spot is India, which has cemented its growth rates significantly ahead of those in China and saw little downgrade in its forecasts for above 7 per cent growth this year and next.

The fund said risks to its forecast were clearly tilted towards a more pessimistic outlook with much reduced chances of a high growth outcome in 2016.

It is concerned that low commodity prices combined with high debt in many emerging economies will cause bankruptcies which might create wider financial strains. – Copyright The Financial Times Ltd 2015