How to be a good keynote speaker at a tech conference 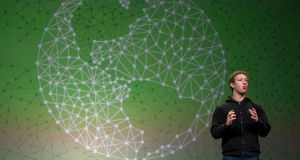 Facebook founder and chief executive Mark Zuckerberg can appear “awkward” when giving presentations, according to John A Daly, former president of the National Communication Association in the US. Photograph: Kim White/Bloomberg

If politics is show business for ugly people, tech is the Hollywood equivalent of working with animals or children. And that was okay, until recently.

The average tech conference used to be a relatively dull affair, of interest only to a small number of aficionados.

These days it has become a media circus with light shows, elaborate stage designs and exclusive performances from rock stars. Any event can be made to appear hip with enough cash. Mutton dressed as lamb, as they say.

The fastest way to bring a tech event back down to earth is for the keynote to be delivered by an awkward poindexter.

“The hand of Hollywood can definitely be seen in major tech keynotes now,” says Jane Evans Ryan, a strategic and executive leadership communications expert based in San Francisco.

“It’s a mix of production extravaganzas, choreography, performance art and scripted content. For some CEOs, the “act” comes naturally. For others, it’s a less natural milieu and takes much training/role-playing to acquire comfort.”

Of course, some tech wizards are blessed with the “gift of the gab”.

Not only did Steve Jobs introduce showmanship to product unveilings and keynote speeches, but some of his presentations are still considered best practice.

“For him it was a performance – how he stood, how he dressed,” says John A Daly, former president of the National Communication Association in the US, and author of several books on public speaking. “The number of rehearsals he insisted on was astounding.”

Jobs had an artistic side that he loved capitalising upon.

“He was also acutely aware how important it was that Apple differentiated itself from IBM, ” says Daly.

It didn’t begin and end with Jobs. There are some good ones out there now, too.

“Jeff Bezos of Amazon can be great when he wants to be,” says Daly. “Co-founder and former CEO of Nike, Phil Knight, admittedly hated public speaking, but was still very good at it.”

Not everyone is so lucky.

“Mark Zuckerburg appears awkward,” he adds. “Michael Dell seems awkward sometimes too, but he wasn’t raised doing it. Too much coaching is a bad thing because you run the risk of losing too much of your own personality.”

Adding too much humour to a speech, if you’re not normally “that guy”, is the kind of thing that can kill an otherwise good keynote.

Other tech pioneers pay little attention to the etiquette. People like Oracle’s Larry Ellison have little to lose so ad lib much of their speeches.

“Founders and co founders are less risk averse because they run the show anyway and don’t have to answer to anyone,” says Daly.

As important as good communication skills are, no one is hired to be a chief executive on account of their public speaking ability. That’s why there are risks.

“You’re always one comment away from destroying your career,” says Daly.

In 2014, Microsoft chief executive Satya Nadella had to apologize for a comment he made at a tech conference suggesting women wait for “karma” rather than actively calling for more income equality in the tech sector (if that wasn’t bad enough, there happened to be 7,500 female engineers in attendance at the event).

There are some universal tricks to making any speech seem successful. Preaching to the converted always helps.

Pack the audience with people who will be wowed by the material.

“Book a smaller auditorium than you think you’re going to need, so it looks packed,” adds Daly.

A lot of tech support is crucial. At the risk of stating the obvious, technical glitches at any major conference, no matter how minor, are not forgiven quickly.

You must have a prototype of whatever it is you’re unveiling that actually works, and have someone demonstrating how it workss.

Focus on one main point, and avoid trying to cover everything. Having a central theme is crucial.

“The problem for tech speakers these days is that they must communicate with several different audiences simultaneously – the market place, consumers, engineers,” says Daly.

It used to be other tech people and some analysts from Wall Street who cared.

“Now the audience is the world. So the language must be easy to understand.”

The ideal speech should be simultaneously solid and abstract. You want to create both a high level discussion, while also including how the product or service can be used immediately.

“The speaker should be concrete about the tech itself but abstract about what it can do,” says Daly. The abstract brings the audience’s imagination into play. “This is where you’ll find the ‘change the world’ rhetoric that’s so common these days.”

That kind of highfalutin language is okay at the top. But boasting about major disruption when still a fledgling company is not advisable.

Apple’s Tim Cooke, for example, gets to talk about devices consumers use every day. All he needs to do is wow them.

Those at the smaller scale, with niche tech, must be able to explain why they are relevant.

“The communications strategy you use for any new tech won’t convince an audience of its technical superiority,” says Evans-Ryan. “That should speak for itself. But it will help getting funding. Novice CEOs in this milieu require lots of preparation, training, scripting, role-playing; even counsel on clothing choices.”

1 Who are Ireland’s 17 billionaires?
2 My father in a nursing home wants to gift me his house
3 Are there annual limits on inheritances or gifts to a child?
4 The entrepreneur who went from ‘total poverty’ to a Lamborghini
5 State subsidises public sector retirees to cover gap until State pension
6 Swiss police suspect Davos plumbers of being Russian spies
7 O’Flynn company ‘mistakenly’ got go-ahead for Birmingham project
8 Should I sell the old family home to allow children buy apartments?
9 Davos Diary: Chilly reception for Trump’s ‘prophets of doom’ speech
10 Pretax profits decline sharply at Tuam-based car tech firm
Real news has value SUBSCRIBE