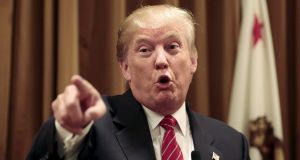 US Republican presidential candidate Donald Trump speaks during a news conference regarding issues on undocumented immigrants in Beverly Hills, California, last year. Trump has vowed to end the H-1B visa programme, which many tech companies rely on to hire highly-skilled workers from abroad. Photograph: Jonathan Alcorn/Reuters

The prospect of a President Donald Trump is rattling Silicon Valley – even if his fellow Republicans can’t find any trace of his campaign there.

The US tech hub is waking up to the reality that billionaire developer Donald Trump is on track to win the Republican nomination. A “Trump effect” is moving through the valley, freezing the cheque-writing hands of conservative donors as they wait to see how the primary campaign drama plays out.

For Democrats, Trump’s history of misogynistic and anti-immigrant statements has been a boon, a jolt to fundraising for Hillary Clinton since Trump took hold of the GOP race by steamrolling through the Nevada caucuses.

Perhaps it isn’t surprising that some tech world conservatives fear Trump – they’re still wondering what he meant when he proposed “closing areas’’ of the internet to combat terrorism.

“Most of my friends think he’s a f***ing idiot,’’ said libertarian-leaning venture capitalist Michael Kim, when asked about Trump when he was a panellist at a recent Palo Alto event on venture funding and tech policy. But as they watch Trump march toward the nomination, “they’re kind of in the resignation stage”.’

Hewlett-Packard Enterprise CEO Meg Whitman – who was a top fundraiser for also-ran candidate Chris Christie – urged the New Jersey governor’s donors not to support Trump even though Christie had endorsed him.

“Donald Trump is unfit to be president,’’ said Whitman, a candidate for California governor in 2010. “He is a dishonest demagogue who plays to our worst fears. Trump would take America on a dangerous journey.’’

Valley Democrats, on the other hand, are thrilled at Trump’s lead, particularly those supporting Clinton, who dominates tech donations among all candidates. For them, Trump is giving more people a reason to give . . . to a Democrat.

“The phones are ringing a lot more in the past few days,’’ said tech executive Amy Rao, who has raised more than $1 million for Clinton going back to her first White House run in 2008. “And they’re people I know who vote Republican, and they’re asking what they can do to help Hillary.’’

Trump doesn’t smell much better to valley conservatives. His policy proposals – thinly sketched as they are – are anathema to its Republicans, many of whom tend to be socially progressive and fiscally conservative. Trump is a trade protectionist and his call for a 35 to 45 per cent tariff on imports from China doesn’t go over well in a region that relies on trade with Asia. He also opposes the Trans-Pacific Partnership trade deal, which many top technology firms support.

“Uber is spending $1 billion competing in China, while Trump wants to raise tariffs and is selling a protectionist agenda,’’ said Matt Mahan, CEO of Brigade, a San Francisco start-up working to increase participation in civic discussion. “The last thing you want is a trade war.’’

“That’s a little bit scary in terms of decision-making if that’s how you’re going to run a country,’’ said Christine Hughes, chairwoman of the San Francisco Republican Party, who has hosted fundraisers for Florida senator Marco Rubio, Ohio governor John Kasich and retired neurosurgeon Ben Carson, who has dropped out of the race.

Trump’s anti-immigration rhetoric – like his proposal to ban all Muslims from entering the US – doesn’t go over well in a region where 44 per cent of tech start-ups were founded by an immigrant between 2006 and 2012, according to the Kauffman Foundation.

Trump also lost points in the valley when he called for a boycott of Apple for refusing the FBI’s request that it unlock the iPhone of the San Bernardino gunman.

Culturally, he’s a mismatch. He is a scion who made his money through real estate – that gets shrugged off in the nation’s innovation capital. His positions opposing same-sex marriage and abortion rights are out of step in the valley.

“It’s complete disbelief [in the valley], and it’s disorienting,’’ said Garrett Johnson, co-founder of libertarian-leaning Lincoln Initiatives, which tries to bring together Washington policymakers and valley technologists. “Nobody knows how things will play out.’’- © 2016 San Francisco Chronicle

1 How long can Government afford to keep State pension age at 66?
2 Declan Ganley denies Donald Trump trying to swing lucrative 5G contract for Rivada
3 Top gadgets to help make your home safer this winter
4 Marquees and fleets of delivery vans: how supermarkets are ready for Lockdown 2
5 Brexit: UK and EU agree to intensify talks in rush for deal
6 Ulster Bank tells ‘deeply concerned’ Minister no decision yet on future
7 An Post letter business collapsing under Covid-19 - CWU
8 Deutsche Bank says Irish borrowers face long wait for lower rates
9 LearnUpon’s success shows slow and steady wins the day
10 Covid-19 has shown that much of ‘normal’ life should have been binned years ago
Real news has value SUBSCRIBE