‘We wanted to build a global organisation, but build it in Carlow’ 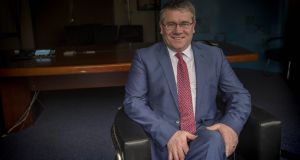 HaloCare CEO David Walsh: ‘We know that outcomes for elderly people are far better when they are living in an environment that they know.’ Photograph: Brenda Fitzsimons

Going global but staying local is what entrepreneur David Walsh is all about. The founder of Carlow-based security monitoring group Netwatch credits regional roots for much of its success. Stepping down as CEO of the group this year wasn’t easy, but he has moved on quickly and has global ambitions for his new health tech venture, HaloCare. Again, they begin at home.

“I remember my father coming home some time in the mid-1970s from a Kerry Co-op meeting and he had met Denis Brosnan, a young man at the time, who said he was going to build this global organisation out of Listowel. All they had was a few Portacabins, but my father believed it,” says Walsh. “I think we were all smitten by it.”

And so it came to pass. The global food ingredients business that is Kerry Group is now worth billions. For the young agricultural science graduate from Castleisland, it was proof that regional talent and ambition could conquer the world.

After UCD, Walsh got his start in Carlow with Borris-based livestock feeding company Keenan. What was meant to be a six-month stint turned into 14 years, with Walsh rising up the ranks and pocketing another playbook for regional business turned global. Carlow became home.

By 2002, it was time to try the formula for himself. The catalyst for Netwatch came when a friend of both himself and Netwatch co-founder Niall Kelly was attacked one night when responding to his workplace burglar alarm.

“He was the key holder. The site had a history of false alarms; he assumed it was another but he was attacked and hospitalised. Niall and I felt there must be a better way of doing things,” says Walsh.

After a fact-finding visit to an Australian company using video transmission to monitor military sites, the pair packed in their jobs and founded Netwatch. The company grew from three people using VHS tapes to monitor a warehouse in Carlow to its now 500 employees using satellite, video analytics and artificial intelligence to monitor 300,000 sites and preventing, the company says, 65,000 crimes worldwide.

Within three seconds of detecting suspicious behaviour at a client site, video footage beamed back to the company’s Carlow communications hub would trigger a live and personalised audio warning telling the intruder, “Yes, you in the black balaclava,” (in a Carlow accent) to get lost.

“We could receive alerts to our communication hub in Carlow within three seconds of an incident at a site in Johannesburg or Boston or New York,” says Walsh. Technological advances meant it didn’t matter where in the world Netwatch employees were based. Except to Walsh it did.

For him, enterprise hits a higher purpose when it also achieves a public good – and, after a slew of devastating closures, Carlow needed some good.

“We rose from the ashes of three outstanding organisations – the sugar factory, Braun and Lapple who were huge employers in Carlow. At their peak, they employed 3,000 people out of a working population of 17,000. We wanted to build a global organisation, but we desperately wanted to build it in Carlow,” says Walsh.

Give someone in a regional town a job so they can live where they love, and they may just give you their all in return. “When you get it right from a culture perspective and you are employing locally in a regional area, people come to work for what they can give, not just for what they can get. In reality, they are working for themselves, they are bought into the locality and they want to build something special.

“The people in Castleisland, or Carlow or Bagenalstown are just as talented as the people in Dublin or Cork or Galway. What we can build on is that sense of belonging. Pride of place comes through in customer service and it comes through ultimately in business growth.”

When recession hit in 2008, Walsh told staff Netwatch would double down on R&D and marketing while competitors were slashing theirs, shift focus to international markets and invest its way out of recession.

“Our mission statement was to create a fearless environment. Everybody thinks that’s about our customers, but it’s about our employees too. They could make decisions in their own lives in terms of extending the house or sending a kid to third level in the certain knowledge they were working in a financially strong organisation that was growing all the time.”

Is the Government doing enough for regional towns? Walsh thinks they have done more since the last recession. “I think there was a realisation that regional jobs don’t move either. When you get a large multinational coming in from outside and there is a big bang recession, they don’t have the same anchorage in the area.”

Back in 2012, Walsh said his philosophy was that the best way to finance any organisation was through gross margin, not bank loans. But for a local company with growing global ambitions, the investment and acquisitions needed to reach them can dilute things.

Netwatch raised €20 million in bank debt in 2016 to further expand into North America, but it realised it needed local partners over there to achieve US-wide reach. In 2018, it merged with companies in Britain and the US in a deal funded by private equity firm Riverside, forming the Netwatch Group.

Riverside took control of about 75 per cent of the holdco. The next largest shareholder was Walsh, with about 12.5 per cent.

There followed bullish plans to grow group revenues by being the security firm of choice in the $15 billion (€13.2 billion) North American legal cannabis market. At the end of 2018, Walsh told The Irish Times, Netwatch was generating “about €10 million” of its annual revenues – that’s close to half the total revenues booked by the Irish company before the merger – from the US cannabis market alone.

“I have absolutely no doubt that, within five years, we’ll get €100 million annually out of it. That’s fully recurring, contracted revenues, and it is also excluding Canada, ” he said at the time.

Just under a year later, Walsh would announce he was to step down as CEO. It was planned, he says.

Had the culture changed? “Yes, is the honest answer,” says Walsh. “We knew very well that the dynamics of the organisation were going to change because it’s a different motivation. And that has happened, to be truthful about it, but we knew it was going to happen.

“I think any entrepreneur you speak to that took on private equity will agree that it’s an emotional journey moving from being the CEO, particularly when you are the co-founders. That makes it more difficult.”

There is self-awareness too. “You have to make the decision yourself whether you are the best person to bring a company to the next level. I was well aware of my strengths and weaknesses. It was the right thing to do to bring in private equity and have a new CEO who has a fantastic capability to drive on the business.”

Was it the outcome he hoped? “There were challenges. We acquired three companies in one day, two in the US and one in the UK, so there are challenges in terms of integrating those. But is the outcome the right one? Absolutely. We have a true multinational organisation across three core markets.”

The thrill of being an entrepreneur has been threefold, says Walsh: disrupting a conservative industry, creating a strong value proposition for local employees, and being able to scale internationally. And he’s about to do it all again.

His new venture HaloCare is a health technology start-up driven by the impact of the Covid-19 pandemic. His co-founders are, again, Niall Kelly and also Dr Johnny Walker, the founder of remote medical imaging company Global Diagnostics.

The business is about monitoring and security again, but this time to enable older people to live independently for longer.

“Our mission is to empower senior adults and those with chronic diseases to live a quality life for longer in their own homes,” says Walsh. “Covid aside, we know that outcomes for elderly people are far better when they are living in an environment that they know.”

HaloCare software can monitor an individual’s movement, posture, and eye gaze, and count steps without the use of cameras. Further interactive devices can remotely monitor the symptoms of chronic diseases such as diabetes, COPD, heart disease and arthritis.

The collection of health information is GDPR compliant and shared with family and health professionals only with the consent of the individual.

Carbon monoxide levels, gas and water leaks in the home can also be flagged. Nurses and care specialists will provide round-the-clock remote monitoring from the company’s care hub in, you guessed it, Carlow. HaloCare has created 20 jobs there with more anticipated.

With long waiting lists for both public and private homecare in this State and a shortage of workers in the sector, the launch comes at a time when older people, their families and Government are in dire need of solutions.

HSE figures at the end of August showed 4,030 people assessed as needing homecare support were still waiting for it. In addition, demographic changes mean ageing is about to become big business. Figures from the CSO predict that the numbers of those aged 65 years and over will increase from 629,800 in 2016 to nearly 1.6 million by 2051.

Walsh says the service is being sold to homecare companies who then resell it to their clients, and to individuals. “We’ve spoken to a lot of homecare companies and a few of them are really eager to use HaloCare as an added product so that they can offer a holistic service.

“Individual family carers will come to us as well as a complement to themselves.

“Professional home carers, family carers and public health professionals do an outstanding job, but they can’t be there 24/7,” says Walsh. “If we really want to move to care in the community, then tech has a role to play in supporting the care-giver and in supporting the person themselves. Technology can be there when carers are not.

“One would hope in time that the HSE or other health organisations around the world would look at this and say we can really change the model in terms of care in the community.”

Going global and staying local is his plan for HaloCare. Older people around the world wanting to live independently for longer can just follow him up to Carlow.

10 Empathy: the secret ingredient in innovation