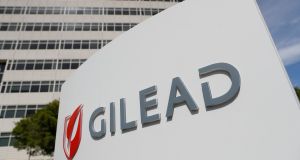 Gilead employs more than 500 staff in Ireland, many working at its Cork plant, where it manufactures drugs for the treatment of HIV and hepatitis

The US is suing drugmaker Gilead Sciences for infringing government patents for the use of two of its flagship drugs to prevent HIV, saying the company has reaped billions of dollars by capitalising on taxpayer-funded research.

In a statement released on Wednesday, the Health and Human Services Department said it filed a lawsuit seeking damages over the company’s alleged infringement of HHS patents for pre-exposure prophylaxis, or PrEP, to bring drugs Truvada and Descovy to market.

Gilead, which employs more than 500 staff in Ireland, had originally obtained FDA approval for the therapeutic use of Truvada – which is priced at $20,000 (€18,000) a year per patient in the US – to treat HIV in combination with other drugs. It then obtained approval for the preventive use of Truvada and Descovy, a newer drug, by using data from Centers for Disease Control, a government agency, HHS said.

HHS said that Gilead refused multiple attempts to get it to try to license the patents.

PrEP is 99 per cent effective in protecting against HIV infection. If used widely, it has the potential to wipe out the HIV epidemic entirely. But pricing – activists, politicians, doctors and patients say – has been a major obstacle in broadening access.

“HHS recognises Gilead’s role in selling Truvada and Descovy to patients for prevention of HIV. Communities have put these drugs to use in saving lives and reducing the spread of HIV,” said Alex Azar, US health secretary. “However, Gilead must respect the US patent system, the groundbreaking work by CDC researchers, and the substantial taxpayer contributions to the development of these drugs. The complaint filed today seeks to ensure that they do.” – Copyright The Financial Times Limited 2019