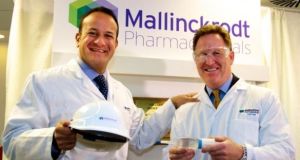 Shares of Irish-domiciled pharma group Mallinckrodt plunged more than 30 per cent to an all-time low on Tuesday after it reported disappointing quarterly revenue and warned of slower sales of Acthar, its biggest source of revenue.

Acthar, which is used to treat infantile spasms and multiple sclerosis, has been under scrutiny for its costly price tag and was at the centre of a federal probe that Mallinckrodt settled in January. At the time, Acthar cost more than $34,000.

Specialty drugs such as Acthar are usually expensive, mainly because they are developed to treat complex diseases. Acthar – which contributes 42 per cent to Mallinckrodt’s overall revenue – generated sales of $308.7 million in the third quarter to September 30th, missing analysts’ average expectation of $326.6 million, according to brokerage Stifel.

Shares of the company, which have fallen 55 per cent this year, were down 32.2 per cent at $21.13 in morning trading on Tuesday. – Reuters