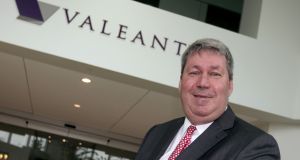 Michael Pearson is to step down as chairman of the board and chief executive officer of Valeant Pharmaceuticals International Inc. The company has appointed activist investor William Ackman to its board. Photograph: Reuters

As recently as last summer, J Michael Pearson styled himself as a brash and bold executive with a new way of thriving in pharmaceuticals: buying other companies, slashing costs and sharply raising prices on undervalued drugs.

The strategy had worked for years, as Valeant Pharmaceuticals, the company he ran, became an investor favourite. By the end of 2015, Pearson and his company’s strategy were emblematic of high drug prices and the pharmaceutical industry’s worst impulses.

On Monday, Pearson as a symbol of innovation hit a dead end, as Valeant said that he would step down as chief executive, a stunning fall from grace that could reverberate throughout the industry. The announcement was one in a series of changes made by the company, which faces a growing list of questions from both investors and regulators.

The company said that activist investor William A Ackman, the billionaire whose Pershing Square Capital Management is Valeant’s second-biggest shareholder, would join the board. In addition, Valeant said it would restate some of its earnings and asked Howard B Schiller, a former chief financial officer, to resign from the board, accusing him of “improper conduct”.

“It’s a soap opera,” said David Maris, an analyst for Wells Fargo. “Here you have something that’s unfolding at an incredible velocity. And you have very colourful characters.”

Success may be difficult, though, since the company no longer has the money for acquisitions and has sworn off big price increases on drugs in response to public outrage. Now, some analysts suggest dismantling the empire assembled by Pearson, which stretches from contact lenses to a drug for toenail fungus.

Last summer, news that Pearson (56) was stepping down would have been virtually unthinkable. The company’s stock then traded at around $250 a share, more than 18-times the price when he took over in 2008. Financial analysts encouraged more drug companies to follow Valeant’s path.

Congress and US federal authorities are investigating Valeant’s drug-pricing policies as well as its ties to a mail-order pharmacy, Philidor, which it used to get around efforts of pharmacies and insurance companies to substitute cheaper generics for some of the company’s costly drugs. Valeant is also struggling to handle more than $30 billion in debt.

Research-oriented pharmaceutical companies have scrambled to distance themselves from Valeant, but have not been entirely successful. “We never considered Valeant to be operating in a way that was consistent with the biopharma model,” Dr Ron Cohen, chief executive of Acorda Therapeutics and chairman of the Biotechnology Innovation Organisation, said on Monday. The attention to drug prices set off by Valeant has scared investors away from pharmaceutical companies in general, he said, but also prompted an “urgent self-examination” by the industry and serious discussions with others about pricing.

In December, with the company already in a tailspin, Pearson took medical leave for what Valeant said was severe pneumonia. He returned three weeks ago, with the company in even worse shape. He will remain at the company until a successor is chosen.