Profits soar at Irish arm of Gilead even as revenues decline 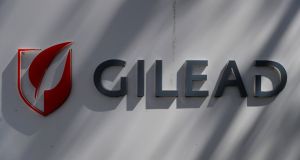 The number employed at Gilead Sciences Ireland – best known for its suite of HIV drugs – last year decreased to 375 from 390. Photograph: Reuters

According to new accounts filed by the Cork-based Gilead Sciences Ireland UC, the company recorded a rise in pretax profits in spite of revenues decreasing by 43 per cent from $10.26 billion to $5.7 billion.

The number employed at Gilead Sciences Ireland – best known for its suite of HIV drugs – last year decreased to 375 from 390.

The directors state that the drop in revenues was primarily due to lower sales of hepatitis C virus products, partially offset by increased sales of HIV products.

The directors say profits for the year increased principally due to a refinement of the company’s transfer pricing policy following updated OECD guidelines and in line with a broader review carried out by the group.

On the company’s future developments, the directors say that from a commercial perspective it expects to continue to promote Biktarvy and other HIV regimens.

Staff costs last year increased from $48.95 million to $54.93 million, and the 375 employed are made up of 113 in production, 147 in management and administration, 82 in medical and regulatory, 30 in distribution and three in sales and marketing.

The business received dividend income of $23.39 million last year, and this followed dividends received of $36.2 million in 2017.