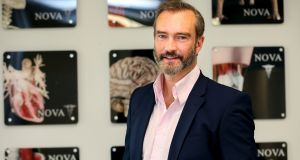 Healthcare apps developer 3D4Medical has been sold to publisher Elsevier in a deal that will deliver a payout of close to €28 million to its Irish founders.

No overall price has been disclosed for the transaction but industry sources indicated that Elsevier had paid some $50.6 million (€45.9 million)for the Irish company.

John Moore, who founded the business in 2004, will earn over €24 million from the sale of the award-winning 3D medical technology company in which he has a 54 per cent stake. His co-founder, Niall Johnston, will receive close to €3.5 million for his holding of just under 8 per cent.

Life sciences group Malin, which paid $16 million for a 38 per cent stake in mid-2015, said it received over €17 million for its shareholding.

Mr Moore said the deal with Elsevier made sense for both parties.

“We’re in 300 universities and we are very proud of that because they include the likes of Cambridge and most of the Ivy League colleges but Elsevier are in 10,000 and so we thought that if we want to take things to another level then the synergy is perfect. We thought it was a natural progression to have this massive distribution channel open to us and for their part they want to be able to use our technology so as to be able to bring flat images to life.

“A lot of students don’t learn through reading now and in addition, unlike the printed page which can show just one image, our 3D visualisation presents multiple anatomical images that can be played around with, which from a learning perspective is priceless,” Mr Moore added.

3D4Medical has achieved over 25 million downloads across its product suites and has been ranked the leading medical app on the app stores of Apple, Microsoft and Google in 160 countries.

The company, whose flagship product is called Complete Anatomy, reported $10 million in revenues last year and recorded a $560,000 pretax loss. Mr Moore said the company is now ebitda positive. He added it was particularly proud of the fact that after switching to a Software-as-a-Service (Saas) subscription model last year, its subscriber based had risen from 15,000 to 80,000 currently.

Mr Moore said he intends to stay with 3D4Medical while also continuing to pursue other business interest.

Malin, which has seen its share price tumble as much as 60 per cent since its 2015 flotation, said the amount it received from the sale of its stake, represented a 10 per cent premium on the value of its shareholding as of the end of June.

“The net proceeds that we will receive from this transaction will strengthen our capital position, reducing our outstanding EIB debt, as we look forward to several clinical milestones in our priority asset group in 2020” said Malin chief executive Darragh Lyons.