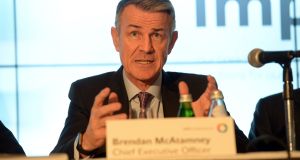 UDG Healthcare has recorded an operating profit of $158 million for the 12 months to the end of September and said it expect further growth over the medium term.

The Dublin-based healthcare service provider saw earnings per share rise by 7 per cent of 48.4 cents last year, which it said was “at the top end of guidance”.

UDG is proposing a 5 per cent hike in its final dividend to $12.34 cent per share.

Speaking to The Irish Times, chief executive Brendan McAtamney said the company recorded double digit revenue growth across its core Ashfield and Sharp businesses, which combined account for about 80 per cent of group revenues.

The company completed has three acquisitions in 2019 for a total consideration of up to $137 million, including the recent purchase of US strategic scientific communications agency Canale Communications.

Mr McAtamney said the group has deployed about €870 million acquiring 22 companies since 2012. It has disposed of four businesses during this period.

The group anticipates further acquisitions over the next 12 months.

“Our balance sheet is pretty unlevered so there is headroom for debt and we obviously throw up earning annually. Typically our modus operand is two to three acquisitions a year and I would expect that to continue,” he said.

He said the company was providing medium term guidance of a 5 to 10 per cent rise in operating growth in Ashfield, its healthcare advisory and communications division.

Analysts responded positively to the full-year results with Davy reiterating its “outperform” rating for the company. Liberum also welcomed the strong showing and reiterated its ‘buy’ rating.