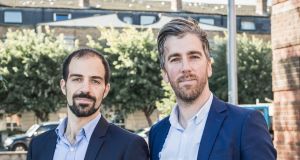 The Series A funding round was led by the Dutch investment firm LSP and the Atlantic Bridge University Fund, the €60 million fund centered on early-stage companies coming out of third-level research institutions in Ireland. Other participants include Enterprise Ireland and a number of prominent medtech entrepreneurs.

The funding will be used to advances product development, carry out clinical trials and prepare for a market launch of Verafeye. This is a novel breakthrough technology in the field of medical imaging.

Founded by Fionn Lahart and Christoph Hennersperger in 2017, OneProjects is initially focusing on facilitating the treatment of cardiac arrhythmias such as atrial fibrillation (AFib). This is a disease that affects over 38 million people globally and which is one of the most frequent causes of strokes and other heart conditions.

Treatment for Afib is usually via catheter ablation and in many cases the procedure is unsuccessful. Using advanced imaging and data analytics in tandem with its catheter-based sensor system, Verafeye provides 4D data from within the heart, thereby increasing the efficacy of treatment for patients.

“This investment will help us to further build our team in Dublin and Munich, advance product development and ultimately achieve our goal of helping physicians provide a far better treatment for patients suffering from AFib,” said Mr Lahart, OneProjects chief executive.

As part of the transaction, Drew Burdon from LSP and Helen Ryan of Atlantic Bridge are joining OneProjects’ board along with David Milne, a former managing partner at SV Healthcare Investors.

The Atlantic Bridge University Fund, which was established in 2015 has backed a number of promising Irish companies in recent years, include Aylien, Output Sports, Kastus, Danalto, Volograms and Ambisense.