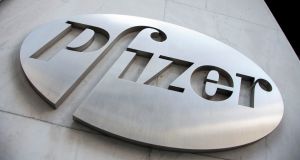 Pfizer’s newer medicines were the bright spot again last quarter amid sluggish overall sales, buying the drugmaker some time as investors keep the pressure on making a deal and replenishing its pipeline.

Quarterly profit still topped Wall Street forecasts, driven by stronger-than-expected sales of pneumonia vaccine Prevnar. The largest US drugmaker said on Tuesday that Prevnar had recorded sales of $1.38 billion in the first quarter of 2018.

Analysts on average had expected sales of $1.37 billion for the drug.

The company said it still expects to make a decision on its consumer health unit during the year. The future of the business, which was valued at $20 billion, has been unclear since March when two potential buyers pulled out of the bidding process.

Pfizer began reviewing the business, whose products include Advil and heartburn reliever Nexium, in October.

Overall, first-quarter earnings per share were 77 US cents, excluding some items, Pfizer said in a statement, ahead of the 75-cents average of analyst estimates. Net profit rose to $3.56 billion or 59 cents per share, from $3.12 billion or 51 cents per share a year earlier.

Revenue rose just 1 per cent to $12.9 billion, lower than the $13.1 billion predicted by analysts.

Sales from Pfizer’s innovative health segment, which includes the newest drugs, rose 6 per cent from a year earlier. Revenue from the consumer unit under review gained 7 per cent.

Shares were down less than 1 per cent at $36.36 in pre-market trading in NewYork.

Pfizer employs around 3,300 people in Ireland at seven different sites.

Pfizer has faced pressure from investors to make deals and expand its pipeline of research. A proposed $160 billion merger with Allergan was scrapped after the Obama administration cracked down on so-called inversion deals. Pfizer also attempted a $120 billion deal with British drugmaker AstraZeneca. – Bloomberg