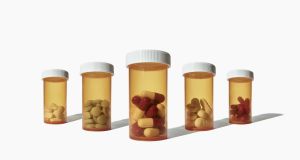 Irish patients are being denied access to nine drugs that are widely available across Europe, largely on cost grounds.

The drugs – most of them cancer therapies – have gone through the Health Technology Assessment, which examines the clinical effectiveness and safety of new drugs as well as their cost-effectiveness and budget impact.

However, they are still not approved for patients by the HSE. On average, the nine drugs have been waiting for two years on a decision from the HSE as to whether it will pay for them, an industry group says.

The therapies are listed on a new quarterly monitor issued by the Irish Pharmaceutical Healthcare Association (Ipha), which represents pharmaceutical manufacturers.

It reports on drugs that are stuck in the system and also those that have been approved. This initial report says that seven new therapies have been approved by the State so far this year. They include MSD’s cancer drug Keytruda and GlaxoSmithKline’s Nucala, which treats severe asthma.

Among the drugs still waiting for approval are Pfizer’s breast cancer drug ibrance and Spinraza, a Biogen drug for the rare genetic disease, spinal muscular atrophy.

Apart from Spinraza, six of the drugs on the list are cancer therapies and two are designed to treat cholesterol.

Among the other companies with drugs on the list are cancer drug heavyweights Roche and Bristol Myers Squibb, as well as biotech group Amgen and Sanofi, which is understood to have two of its drugs awaiting approval.

Figures from the European Federation of Pharmaceutical Industries and Associations show that only 57 of almost 150 medicines approved by the EU regulator, the European Medicines Agency, over the three years to the end of 2016 were approved for reimbursement and available in Ireland’s public heath service by the end of 2017.

That compares with 124 for Germany, which has the best record of sanctioning new EMA-approved drugs, and 120 in the UK.

Overall, Ireland ranks 18th out of 26 European countries for availability of medicines by this measure.

“It is not good enough that patients in Ireland should be among the last in western Europe to have access to these new medicines,” said Ipha chief executive Oliver O’Connor.

Two of the drugs stuck in the Irish process waiting for approval on payment by the HSE are already available in all of the other 14 states against which prices in the Irish market are set.

All but two are available in 10 or more of the price basket countries and the remaining two are available in nine. That basket was extended in the most recent drug pricing agreement to include more low-cost countries for medicines. The list comprises: Austria, Belgium, Denmark, Finland, France, Germany, Greece, Italy, Luxembourg, the Netherlands, Portugal, Spain, Sweden and the UK.

The industry argues it is delivering €785 million in savings on the HSE drugs bill over the course of the pricing accord, which runs to 2020. Those savings, the association says, “should provide headroom for the HSE to fund new medicines” but it stresses that those savings do not remove the need for increased exchequer spending on drugs, given the aging profile of the population and the increased availability of therapies for previously untreatable conditions.

The HSE, for its part, points to the medicines it has approved and the costs these have added to the annual drugs bill in an environment where there is continuous pressure on the health budget.