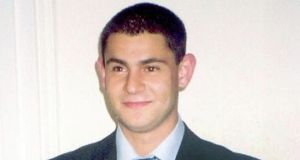 Sapper Patrick Azimkar was shot dead outside the Massereene Barracks, Antrim, in 2009.

A British army barracks where two soldiers were shot dead by dissident republicans has been bought by an international medical diagnostics company.

The former military base at Massereene in Antrim, which had been on the market with a €4.8 million price tag, has been sold to Northern Ireland-based Randox Laboratories Ltd.

The entrance to the heavily fortified site was the scene of the Real IRA gun attack that claimed the lives of soldiers Mark Quinsey (23) and Patrick Azimkar (21) in March 2009.

Masked gunmen
Two masked gunmen shot the soldiers at close range after ambushing them as they collected a pizza delivery just hours before they were due to deploy to Afghanistan. Two other soldiers and two pizza delivery drivers were seriously injured in the gunfire.

The base was the home of 38 Engineering Regiment in 2009, but closed a year later as part of British ministry of defence restructuring measures. The regiment moved to a newly constructed base at Aldergrove.

The Massereene site, which also accommodated the Royal Marines in the past, was put on the market last year.

Memorial relocated
A memorial to the murdered soldiers that had been erected inside the base has been moved to Aldergrove.

The complex stretches to almost 17 hectares and incorporates more than 44,000 square yards of buildings and warehouse space.

Aside from accommodation, the site also contains dental and medical facilities and a jetty on to Lough Neagh.

A Randox spokeswoman confirmed the purchase but did not give details of the sale price or how the site would be utilised. “We have purchased the site and will be giving due consideration to its use as we go forward,” she said.

A British official said: “The [ministry of defence] can confirm it no longer owns Massereene barracks. A memorial to the shot sappers has been moved to Aldergrove where 38 Engineering Regiment has moved.”