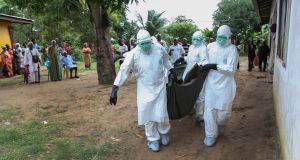 Liberian nurses carry the body of an Ebola victim in 2014. Vaccines were not available to victims of the epidemic, lobby group Access to Medicines Ireland says. Photograph: Ahmed Jallanzo/EPA

It is calling for changes in the approach to pharmaceutical research and development to make medicines accessible at a lower price. It also wants the industry to concentrate more on areas of greatest global health need rather than just the developed world where profits can be highest.

Michael Barry, who is clinical director at the National Centre for Pharmacoeconomics, will be keynote speaker at the advocacy group’s third annual national conference at the Royal College of Surgeons in Dublin on April 16th.

Earlier this year, Prof Barry warned that Ireland’s available budget for new drugs had been virtually fully spent less than two months into the year. He is expected to lay out some of the difficult choices facing the Irish health system in the coming years.

“It is clear that, unless addressed, the current system of medicines development will continue to heap financial pressure on strained health systems and put pressure on governments to reimburse medicines at any price,” said Kieran Harkin of Access to Medicines Ireland, a group of medical professionals, patients and concerned members of the public.

The advocacy group is concerned at what it sees as the lack of negotiating power available to the Health Service Executive in accessing some effective new treatments that are coming on stream but which can cost more than €300,000 per person.

It also wants to alter the R&D focus of the industry which it argues is currently based on the likely return that a product will offer through sales. This, it says, locks out people and markets that are not seen as lucrative. It points to the absence of a vaccine option during the Ebola crisis in 2014 and 2015 and a lack of research into neglected diseases such as Chagas disease, multidrug-resistant tuberculosis, and the effects of snakebites.

The conference will also hear from a number of patients and patient advocates, as well as a HSE programme manager who has been involved in drug price negotiations, and a health specialist from the Netherlands, which has taken steps to address drug price and R&D issues in recent years.