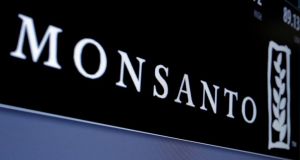 A deal with Monsanto would give Bayer a shot at grabbing the top spot in the fast-consolidating farm supplies industry. Photograph: Brendan McDermid/Reuters

German pharmaceutical and crops manufacturer Bayer said its negotiations with Monsanto Co had advanced, and it was now willing to offer more than $65 billion to acquire the world’s largest seed company.

Bayer’s announcement came as the gap in price expectations between the two companies narrowed significantly, although important terms, including potential divestitures in case of antitrust scrutiny, have yet to be agreed.

Bayer in a statement said that it was prepared to offer $127.50 a share in connection with a negotiated deal, up from its previous offer of $125 a share. It confirmed a report by German daily Rheinische Post which, citing sources it did not identify, said an offer of $130 per share might be necessary to clinch a deal with Monsanto “in a swift and friendly way”.

Bayer’s bid was already the largest all-cash proposed takeover on record. A deal with Monsanto would give the German company a shot at grabbing the top spot in the fast-consolidating farm supplies industry. ChemChina agreed earlier this year to buy Switzerland’s Syngenta for $43 billion, after the latter rejected takeover approaches from Monsanto. Dow Chemical Co and DuPont are forging a $130 billion merger, which is to be followed by a break-up into three businesses.

In July, Bayer raised its earlier offer of $122 a share to $125 to put Monsanto under pressure to engage further. Monsanto subsequently turned down Bayer’s offer of $125 a share, but said it was open to further talks with the German company, as well as other parties.

Reuters reported last month that Monsanto’s talks with Bayer were making progress, with the latter receiving some limited access to Bayer’s books.

Since then, negotiations have advanced further, with more information exchanged between the two sides and the chief executives of the two companies engaging in direct discussions, according to people familiar with the matter, who asked not to be identified because of the confidentiality of the talks.

However, while the two companies are close to reaching an agreement on price, they have yet to agree on a strategy on how to jointly tackle potential antitrust challenges, the people said. – (Reuters)

1 Will your boss let you work long-term from home – or from abroad?
2 House asking prices rebound but will likely fall again - MyHome
3 AA Ireland bought by Olivier Sarkozy-led fund for over €200m
4 Revolut shifts regulation of Irish customers to Lithuania
5 Google tells workers to return to country where they are employed
6 Plans for €2bn Dart expansion lure Bombardier to Dublin
7 Ryanair tells Minister it will close Cork and Shannon unless EU travel plan is adopted
8 Subway bread too sweet for the Irish tax authorities
9 City firms move £1.2tn and 7,500 jobs out of London - EY
10 Technology giant Google pledges $1bn to pay for news
Real news has value SUBSCRIBE