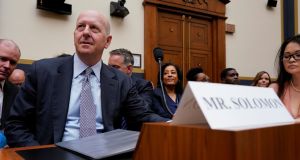 Goldman Sachs chief executive David Solomon at a hearing on Capitol Hill in Washington. He is gambling on bank’s ability to do new things following decline in fixed-income trading. Photograph: Aaron P Bernstein/Reuters

In the aftermath of the financial crisis, as most trading houses licked their wounds and put safety before sales, Goldman Sachs chose a different path.

“You see Morgan Stanley cutting, European banks . . . who knows what they’re doing? And you think: ‘Let’s go for it!’” recalls one former Goldman partner who worked in its trading division at the time, describing a “deeply rooted” mission to “capitalise on others’ weakness”.

A decade on, the trading weakness is most obvious within Goldman’s famous fixed income, currencies and commodities (FICC) division, once the engine of the most profitable bank on Wall Street.

Facing a crescendo of calls to “fix” FICC, David Solomon, the new chief executive who has no ties to the trading side of the business, is changing course.

Solomon is not suddenly copying the slash-and-burn approach of many rivals – although he has reduced risk-taking and cut some jobs. Instead, true to his background as an investment banker, he is trying to schmooze a broader range of clients.

In place of the hedge funds, who used to be core clients until they suffered their own prolonged slump, Goldman is reaching for alternatives.

Of all the sell-side firms, they probably have turned that ship around more than anybody else

To do this, Solomon is gambling that Goldman can do new things: from adding cash management services typically offered by commercial banks to opening up its technology platform in the same way as Google Maps has done for Lyft, the ride-hailing app.

“None of this has been a revolutionary change for the firm or the securities division,” said Jim Esposito, co-head of the securities division, of the initiatives Goldman has undertaken in its trading business since Solomon took over this year. “We continue to look for places to build scale efficiently while deepening and broadening our client franchise.”

While lacking the drama of Morgan Stanley’s decision to axe 25 per cent of its fixed income traders in 2015 or UBS’s decision to shut most of its FICC division in 2012, the changes under Solomon nevertheless mark a decisive turning point for Goldman.

So, too, does Solomon’s recent assertion that the bank is alert to the “secular” changes in the FICC market, where revenues across the top 12 players more than halved in the decade since 2009, according to data from industry monitor Coalition.

Solomon’s predecessor, Lloyd Blankfein, who entered the firm in 1982 as a manager in its commodities trading brokerage, never budged from the line that the FICC market was in a cyclical dip that would end.

Recent personnel changes have gone much deeper than just Blankfein, who ran Goldman for 12 years until his retirement last October. Pablo Salame, a Blankfein confidant regarded as the most powerful of Goldman’s three FICC co-heads, left the bank in May 2018, soon after Solomon was appointed, as did another co-head Isabelle Ealet, who was known as “the commodities queen”. Esposito now shares the role with the surviving co-head Ashok Varadhan, a 21-year Goldman veteran, and Marty Chavez, Goldman’s former chief financial officer.

More significant than the internal changes are Goldman’s external efforts. Several years ago Blankfein began holding “chairman’s forums” where he and senior executives would espouse the importance of a client-focused approach.

At the time, some traders were unconvinced, noting that their bonuses still seemed to move in tandem with their contribution to the profit and loss account. “We all knew that at the end of the year, all that mattered was P&L,” said one.

From the customer side, one large asset manager recalls how, as recently as five years ago, “Goldman Sachs would come here every year and they would say that they want to do more business with us and that we were a trusted ‘counterparty’”. It was received badly: “They were missing the boat, there’s a difference between a client and a counterparty.”

More recently, the asset manager began to see a difference. Goldman was sharing technology and ideas and expressing an interest in trying to solve his problems. “Of all the sell-side firms, they probably have turned that ship around more than anybody else,” he said. He has significantly increased the business he does with Goldman in the past two years.

New services are one draw. Most of Goldman’s rivals have divisions that offer cash management and treasury functions. “Those platforms send a bunch of captive revenue into FICC, and we just don’t compete,” Solomon said at a Credit Suisse conference in February.

Goldman is building its own cash management division, first for its in-house needs and then for outside clients from 2020. “Good luck to them,” said a senior markets executive at a rival investment bank, noting that such businesses usually take decades to build.

Goldman sees mastery of technology as an accelerant, much as it has quickly built a sizeable retail bank by investing in a clean website and avoiding the bricks-and-mortar branches that encumber rivals.

“There are things that clients aren’t getting from those big players – the technology and data analytics. With a white sheet of paper we think we can really solve their problem,” Solomon said in February.

Some clients already connect directly with Goldman through its digital trading and risk management platform Marquee, which Esposito describes as “our digital storefront for institutional investors”, with 13,000 monthly active users. “Our ambition is large,” said Esposito. “Longer term we want every existing Goldman Sachs institutional and corporate client to use Marquee and we’re optimistic this platform will attract many new clients too.”

Greater use of technology is supposed to improve efficiency across the business. Ezra Nahum, co-head of Goldman’s securities engineering division, said one of the biggest change since Solomon took over is the “front to back” strategy which requires trading executives to take responsibility for the entire life cycle of a trade, rather than just focusing on bringing in business.

Another executive said: “Lloyd wanted the front office to think about revenue. David, he deals with companies [as an investment banker], he has an understanding of the cost of production.”

The cause of the fall in Goldman’s FICC business – and the management’s reaction to it – remains a contested topic among current and former Goldman executives. The most popular narrative is that Goldman simply suffered a catastrophic failure of imagination, remaining blindly committed to FICC long after post-crisis regulations made swathes of the business uneconomic.

Still, a recent report from analysts at Citigroup lends weight to the theory that Goldman was behind the curve.

Citi’s number crunchers calculated that between 2012, when post-crisis regulations really began to bite, and 2015, Goldman reduced the daily “value at risk” – how much the bank stands to lose in normal market conditions – by just 12 per cent in its FICC business compared with a 39 per cent reduction from a sample of eight of the biggest FICC traders.

The moderate risk reduction looks even starker when compared with the 26 per cent reduction in the revenue of the FICC business over the same period, supporting the argument that the returns in Goldman’s FICC business went into freefall because much of the business simply did not make sense in the post-crisis regulatory environment.

Notably, commodities trading, the area that Blankfein worked in earlier in his career, was a traditional Goldman strength but one that was heavily damaged by post-crisis regulation.

Some insiders see the world differently. “The whole regulatory environment change was an excuse, it’s not the reason the business isn’t performing as well as it used to,” said one former FICC executive. He believes the biggest impact of regulation – and the reason for the demise of Goldman’s FICC business – was an “obsession” with return on equity which he dates to about 2015.

Another executive, however, defended the approach. “We were covering the downside risk while other banks were winging it,” he said.

A Goldman spokesman said it was “focused both on the efficient use of capital and improving the client experience. The two are synergistic, not mutually exclusive.”

For his part, Esposito does not see his new boss’s reference to a “secular” decline in FICC as a seminal moment. “We’re a decade into QE [quantitative easing] and its resulting impact on financial markets,” he said. “Of course the debate rages on about how much of a drag are cyclical versus structural forces. We’re simply focused on the things we can control, the rest will be what it will be”. – Copyright The Financial Times Limited 2019