Debit cards forecast to be more important than credit cards 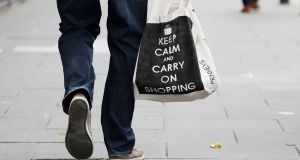 A report by Accenture published on Wednesday predicted that cash usage would fall by an average of 30 per cent across Europe this year. Photograph: PA Wire

The pandemic is heralding a “permanent” shift in consumer spending, with increases in debit card and domestic transactions here to stay, according to Visa’s European chief executive.

Charlotte Hogg, who has led the payments group’s European arm since 2017, said in an interview that lockdowns around the world had caused a boom in online shopping and precipitous declines in cash usage: “Behaviours have fundamentally changed.”

“It’s too early to say it’s a recovery but you’re starting to see some data that suggests things are picking up,” she said.

While spending in sectors such as retail and home improvement has started to improve, Ms Hogg was less optimistic about prospects for the travel industry, which is a key revenue driver for many payments groups.

Visa blamed the weakness in the travel sector for a slowdown in its growth in the second quarter of its financial year, ending March 30th, and said in April that the uncertainty made it impossible to forecast its full-year results.

“I can call out some of the positives in the other sectors, but it’s really too early to say on [travel]”, said Ms Hogg, who was previously chief operating officer and briefly deputy governor at the Bank of England. “The decline was pretty sizeable, and it’s not showing the kind of recovery” taking place in other sectors.

Visa, which processed 138 billion transactions last year, is hoping to offset some of the decline in cross-border payments by encouraging a further shift away from cash in domestic spending.

A report by Accenture published on Wednesday predicted that cash usage would fall by an average of 30 per cent across Europe this year. Visa is hoping to accelerate the move by convincing more public transport networks to introduce contactless payments and pushing regulators to raise the limits on the maximum size of contactless transactions.

Several countries have temporarily increased the limits during the pandemic in response to concerns about handling cash, up to €50 in much of Europe, including the Republic. Ms Hogg said that while “I don’t think we would jump to doubling it just yet”, she believes that ultimately the contactless limit should be big enough to cover a household’s weekly grocery shop.

Campaigners have raised concerns that rapid changes in cash usage risk excluding older and more vulnerable customers. However, Ms Hogg argued that digital payments could help vulnerable customers who need to continue shielding themselves from the virus for an extended period.

She also dismissed concerns that some countries s lack the technology and telecoms infrastructure required to support a widespread move away from cash, but noted that small businesses in particular would need to do more to plan for the new normal. She said Visa was working with banks and other partners to help SMEs adjust.

“Many of their business models aren’t geared for a digital world - that’s not what they’ve had to do in the past, but now consumers are really calling for that.” – Copyright The Financial Times Limited 2020

1 MSD buys Takeda biologics plant in Dunboyne
2 State’s biggest landlord records 30% rise in rental income
3 Irish tourism must also help itself to survive the pandemic
4 ‘Saudi Arabia is where the opportunities will happen in future’
5 What will the office market look like after the great remote working experiment?
6 Trump signs executive orders banning TikTok and WeChat
7 Identigen founders make €12m each from sale of company
8 Starling resumes talks with Central Bank on banking licence
9 Wifi problems? Quick tips to get your home internet out of the slow lane
10 Wirecard was looted before collapse, German prosecutors suspect
Real news has value SUBSCRIBE