Pope about to replace IOR board and executives 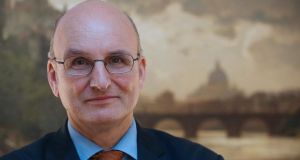 Institute of Religious Works president Ernst von Freyburg (above) is to be replaced by Jean-Baptiste de Franssu, who already works with with the Vatican’s Council for the Economy. Photograph: EPA/Alessandro di Meo

The reform process Pope Francis has prompted at the controversial Vatican bank IOR is about to move on to “phase II”.

Francis is about to replace the board and executives at IOR at the end of a year of wholesale reorganisation, which has seen the blocking of more than 2,000 accounts.

In a recently published book, The Hands of the Mafia, Corriere della Sera journalist Maria Anonietta Calabro revealed IOR still uses some of the same accounts in Italian banks as in the early 1980s at the time of the Banco Ambrosiano scandal.

Announcing the changes, Australian Cardinal George Pell, the Vatican’s new finance chief in charge of the recently created Secretariat for the Economy, said: “We are now in a position to move IOR to a second phase of reform under new leadership . . . This is a time of major change in the Holy See, not only for IOR . . . With the support of the Holy Father and the Council of Cardinals, we are creating simpler, more efficient structures for those serving the mission of the church.”

Phase II will see IOR president German Ernst von Freyburg replaced by Frenchman Jean-Baptiste de Franssu, a man who already works with with the Vatican’s Council for the Economy.

In the last year, Mr von Freyburg, appointed as president four days after Pope Benedict announced his resignation in February 2013, has led the reform process. In particular, he engaged the services of global risk-control group Promontory Financial to comb through IOR’s approximately 20,000 current accounts.