Up to 2,200 job cuts likely at Bank of Ireland under cost-cutting plan

Broker says bank likely to cut headcount by up to 20% 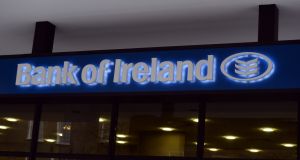 Bank of Ireland has already seen its workforce fall almost 32% from a peak of 16,000 in 2008. Photograph: Cyril Byrne

Bank of Ireland is likely to cut up to 20 per cent of its workforce by the end of 2021 as it aims to slash its cost base under targets unveiled last month by the lender’s chief executive Francesca McDonagh, according to analysts at Investec Ireland.

The estimate points to as many as 2,180 jobs being cut, based on the bank’s 10,892-strong employee base last year, including 500 people on fixed-term contracts. The projection includes up to 400 jobs the bank is seeking to cut this year by axing 15 per cent of middle-management roles and closing its 27 back-office service centres around the country.

Ms McDonagh, who became group chief executive last October, said on June 13th that Bank of Ireland was setting aside €250 million for restructuring, including redundancies, as she expanded the scope of the group’s four-year technology overhaul and transformation programme. The total project will cost €1.4 billion, up from €900 million when it was originally unveiled in 2016.

“Targets for a reduction in underlying costs of 10 per cent between 2017 and 2011, including the impact of wage inflation, suggest total headcount reductions of 15-20 per cent are likely when the existing rationalisation programmes are included,” said Owen Callan, an analyst with Investec in Dublin, said in a report on the bank, published on Wednesday.

“This is ultimately required if the business is to meet its own target of a cost/income ratio below 50 per cent in the medium term.”

A spokesman for Bank of Ireland said that while the bank “has no specific headcount target”, it would be “ smaller over the coming years”.

“One of Bank of Ireland’s strategic priorities is to transform the bank – including culture, technology and business model. We will proactively manage this with our people in a range of ways, as we have managed it in the past.”

Bank of Ireland, whose costs equated to 65 per cent of income last year, said last month that it aimed to reduce the bill for running the business from €1.9 billion to €1.7 billion by the end of 2021. The bank has already seen its workforce fall almost 32 per cent from a peak of 16,000 in 2008.

Mr Callan said the group’s financial targets, which also include an aim to grow the loan book by 20 per cent, after a decade of contraction, “are ambitious” but “attainable”. The analyst increased his price target on the bank’s stock to €9.05 from €8.90, previously.

Shares in the bank closed at €6.95 on Tuesday, having declined about 7 per cent since its capital markets day in mid-June, amid market uncertainty about its ability to meet its four-year growth targets, particularly for the UK where it sees its loan book expanding by 10 per cent.

“We believe this reaction was focused on the higher investment costs announced in relation to the transformation programme, as well as scepticism around some of the ambitious lending growth targets, but has ignored the aspirational vision which the new strategy spells out, and the exceptionally firm commitment to major cost cuts which management has signed up to,” said Mr Callan.