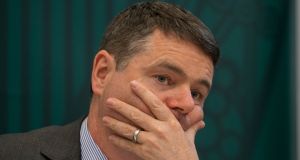 Ireland’s main banks have a “distance to travel” when it comes to their treatment of customers, a report ordered on foot of the tracker mortgage scandal has found.

The Central Bank is also seeking legislative change to give it extra powers to drive cultural change in the banks.

The proposal comes from a Central Bank report, ordered by Minister for Finance Paschal Donohoe, into the culture of AIB, Bank of Ireland, Permanent TSB, Ulster Bank and KBC Ireland following the scandal, which saw tens of thousands of borrowers being either wrongly denied a cheap mortgage linked to European Central Bank rates, or put on the wrong rate entirely.

While the tracker mortgage issue itself has been dealt with separately, the report to be published today focuses on the leadership of the banks and how customers are prioritised.

A code of conduct is likely to be drawn up for all staff in the sector, with specific standards for senior executives.

A memorandum to go to today’s Cabinet meeting from the Department of Finance says there is “merit to the recommendation to increase the powers of the Central Bank to drive cultural change.

“The Behaviour and Culture findings of the report conclude that while the five main banks assessed have taken concrete steps to embed a consumer-focused culture, some are more advanced than others, and all have a distance to travel,” it adds.

An associated report also finds the banks to be “insufficiently diverse and inclusive, particularly at senior level”.