Unpublicised dropping of Michael Fingleton case an affront to taxpayers 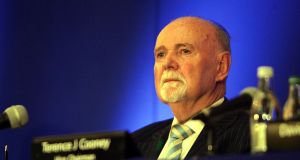 Michael Fingleton, former chief executive of Irish Nationwide Building Society. The decision to drop the case against him has been a long time coming. Photograph: Eric Luke

Former chief executive of Irish Nationwide Building Society (INBS) Michael Fingleton came out fighting when an inquiry into alleged regulatory breaches at the now-defunct lender began public hearings. That was December 2017, almost a decade after the financial crisis.

In an opening statement, the then 79-year-old claimed the whole exercise amounted to an “artificially trumped-up case” and a “cynical exercise seeking scapegoats” to divert attention from the actions of the financial regulator, Central Bank and Department of Finance before the crisis, he asserted.

The seminary dropout, who started off in charge of a five-man lending operation in south central Dublin in 1971 and developed it into a firm with €16 billion of assets at its height in 2007, argued that it was clear from regulators’ interviews with 86 of his one-time underlings that they were “only after the big fish”.

“Whether based on fact, perception, rumour or hearsay, I note in most of the relevant interviews, the people repeatedly reverted to me. I appear to be the main focus of the information-gathering process,” he said, even though four other former INBS executives and directors were also subject of the inquiry from the outset.

“I formally deny all special prescribed contravention allegations that have been made against me.”

Followers of the stop-and-start proceedings in the past two years, however, will never get an answer. The inquiry into the octogenarian was quietly terminated last Friday due to his ill-health.

The decision to drop the case against Fingleton has been a long time coming and, arguably, the humane one, as he has been in bad health for some time, will be 82 next month, and hasn’t been in a position to appear before it since June 2018.

But the method and timing of the communication – an unpublicised decision posted in little-surveyed section of the Central Bank’s website on the Friday before Christmas – is an affront to taxpayers who were forced to bail out INBS to the tune of €5.4 billion before the lender was merged with Anglo Irish Bank and put into liquidation in 2013.

The inquiry was set up to look into seven sets of alleged regulatory breaches between July 2006 and September 2008, including that INBS allegedly failed to process loans in line with policies, obtain property security for commercial loans, get proper valuation reports on assets it was lending against, or establish credit risk policies for profit-share agreements with developers during the boom.

INBS had the most toxic loan book of the six banks guaranteed by the State in September 2008. Nama applied the biggest discount – as much as 72 per cent – to the society’s loans when it took over commercial property assets of the sector during the crisis.

Hearings into the first phase of the inquiry – concerned with the workings of INBS’s credit committee – were put on hold in early 2018 when Fingleton, who was defending himself, went through a period of illness.

During that time, one of the five men under investigation, INBS’s former chairman Michael Walsh reached a settlement with the Central Bank in which he was fined €20,000 and banned from managing a regulatory firm for three years. He admitted his ultimate responsibility for certain breaches, even though he was never involved in day-to-day management of the lender.

Last December, another of the five, former head of commercial lending at INBS, Tom McMenamin settled with the bank, resulting in a €23,000 fine and a ban on him from taking a senior role in a financial firm for 2018. The bank deemed that McMenamin, who is retired, would likely have been forced into bankruptcy if it had imposed the €250,000 sanction it believed his actions warranted.

Both settlements were announced by press releases and made headlines at the time.

INBS’s former finance director John Stanley Purcell and head of UK lending, Gary McCollum, are the only remaining erstwhile executives of the failed lender that are subject to the inquiry, which has proceeded only sporadically in public in the past year and a half.

The Central Bank, meanwhile, continues to refuse to give details of the multimillion-euro cost of the case, saying these will only be revealed when it is concluded. When that will be is anyone’s guess at this stage.