More than 3m contactless payments made each week in Republic 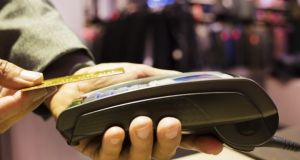 Irish consumers have firmly embraced contactless payments with usage having almost trippled over the last year, according to Visa.

The company said more than three million contactless payments are being made every week through its debit cards, up from 1.3 million a week in March 2016.

On average, five contactless transactions are being made with Visa debit cards every second in Ireland currently.

A decision to increase the threshold for contactless payments from €15 to €30 in October 2015, along with the introduction of a new regime cutting the cost of contactless transactions a few months later has led to wider adoption of payment terminals by retailers.

Consumers are also embracing mobile as a way to manage their finances with Visa’s 2016 Digital Payment study showing that more than 80 per cent of of people aged between 18 and 24 years in Ireland already use their smartphones to monitor money or make payments.

This figure is likely to rise with the recent introduction of both Android Pay and Apple Pay in Ireland.

In related news, the Irish Cancer Society said it is to introduce contactless donations for its annual Daffodil Day collection, which takes place on Friday.