Fifth of all mortgages in 2018 availed of rule exemptions, study finds 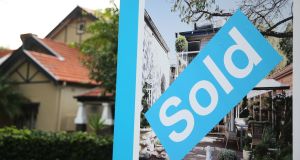 A fifth of all mortgages issued in the Republic last year availed of exemptions from the Central Bank’s tough lending rules, according to new research.

The study by the Central Bank showed that just over 20 per cent of mortgages drawn down in 2018 breached the loan-to-income or the loan-to-value ceilings set by the regulator, close to the maximum permitted.

In terms of the risk profiles of borrowers getting the exemptions, the study found they typically went to first-time buyers who were single applicants, predominately located in Dublin and from the lower to mid range of the income distribution.

This suggests that the allowances system was helping purchasers in more expensive areas, on lower incomes and with only one income source, it said.

The rules, introduced by the Central Bank in 2015, curtail mortgages to 3.5 times a buyer’s salary and to a minimum deposit of 10 per cent from first-time purchasers and 20 per cent from other buyers.

Close to half of first-time buyers with a loan-to-income exception were also borrowing at the maximum available mortgage term and loan to value.

In tandem with the rapid rise in house prices since 2015, the number of issued loans with allowances has grown each year.

The study found that a very small number of borrowers received both a loan-to-value and a loan-to-income exception and that lenders were maximising the use of exceptions by limiting borrowers to exceptions in one category.

Outside of Dublin, borrowers with similar income profiles to those without exceptions are using the leeway on exception grants to expand the property valuation they can access through taking on a larger loan size.

The study concludes that the Central Bank’s mortgage measures have been largely successful in tempering risk-taking in the mortgage market, while allowing for discretion to allow higher loan-to-income and loan-to-value lending to be issued to otherwise constrained borrowers.

The recent slowdown in house price growth – it was 2.8 per cent nationally in May and just 0.6 per cent in Dublin – has been linked to the Central Bank’s lending rules.

While advocates say the rules may have corralled price inflation into a sensible band, critics say pent-up pressure in the housing market has now simply transferred to the rental sector, as evidenced by the 7 per cent rise in rents last year.

Jervis rent row, Energia for sale and Shed Distillery’s €3m investment 06:30
Dogpatch Labs and SOSV shortlisted to win NDRC contract 05:22
Energia’s owner ‘plans to sell it later this year’ in deal worth €2bn 05:16
TikTok up against the clock as US ban leaves it at crucial juncture 05:15
Jervis shopping centre takes major tenants to court over rent disputes 05:03