The NTMA, the bondholders and the Johnny Logan working group

Analysis: ‘Discreet’ inquiries made in September 2008 about IMF bailout 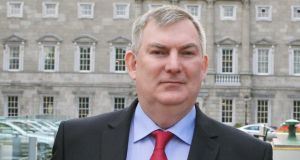 It turns out that Ireland’s double Eurovision winner Johnny Logan isn’t just popular in Turkey. Kevin Cardiff said yesterday that Logan was also a hit in the department of finance at the height of the financial crisis.

There was something called the “Johnny Logan working group” investigating ways of cobbling together “from our own resources, an extra year of funding” for when Ireland exited the troika bailout programme at the end of 2013.

“You know the Johnny Logan song ‘What’s another year?’,” Cardiff said to Sinn Féin’s Pearse Doherty, who was only three when the song won the Eurovision in 1980.

It was a conversation about the recommendation by the National Treasury Management Agency (NTMA) in March 2011 that up to €16.4 billion of senior bondholder debt at the six Irish banks be torched.

Doherty wanted to know how the NTMA could have expected Ireland to get back into the markets in mid 2013 - as envisaged in the troika bailout - if we’d burned bondholders just two years earlier.

In the event, the European Central Bank prevented the burning of bondholders and Ireland exited its bailout smoothly.

Cardiff spent another three and a half hours with the committee yesterday, following his marathon session last week. The focus was his time as secretary general from 2010 to 2012.

For whatever reason, Cardiff wasn’t as energised when compared with his tour de force performance of last week, which dealt mostly with the collapse of the financial sector and the bank guarantee.

What did we learn?

Cardiff revealed that he had made “discreet” inquiries about how to access an IMF bailout as early as September 2008. It was “desk research” in the event that the bank guarantee didn’t work. The Minister for Finance Brian Lenihan didn’t want to have any truck with it.

Secret contingency plans were also drawn up to deal with Ireland being “unceremoniously shown the door” from the euro. But there was never a “serious suggestion” from Lenihan that we consider such a dramatic move.

In proper Sir Humphrey style, Cardiff recounted a hilarious conversation at the time with a colleague from another country.

Such are the ways of the EU.

We discovered that it was Taoiseach Enda Kenny who, in 2012, offered Cardiff the “Government’s nomination” to the European Court of Auditors for six years.

Cardiff said he was physically bunched at that stage after years of crisis work and there was no way he could have kept going for another five years as secretary general. Better the cushy number in Luxembourg, obviously.

And we now know that some members of the Troika wanted the Government to pull the plug on Irish Life & Permanent, a plan resisted by the European Commission on competition grounds.

What a difference four years make. In April, Permanent TSB - the banking arm of the old IL&P - floated again on the stock market, allowing the Government to bank €508.5 million and reduce its shareholding. More Lazarus than Johnny Logan but a winning result nonetheless.