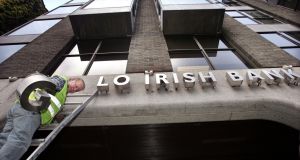 The liquidators conceded that a small group of Anglo Irish Bank junior bondholders will recover the €270 million they are owed. Photograph: Matt Kavanagh

The Government forecasts that it will receive a further €100 million next year from the remains of Irish Bank Resolution Corporation (IBRC), as the company’s liquidators start to pay interest due to unsecured creditors since early 2013.

The figure is contained in a written answer given this week by Minister for Finance Paschal Donohoe to Sinn Féin finance spokesman Pearse Doherty on foot of a parliamentary question.

IBRC was set up in 2011 to take over the assets of failed lenders Anglo Irish Bank and Irish Nationwide Building Society (INBS). It was put into liquidation in February 2013.

The liquidators of IBRC, Kieran Wallace and Eamonn Richardson of KPMG, said last December that unsecured creditors in the bank would receive the remaining 50 per cent of what they were owed within weeks. The State was the biggest IBRC creditor in this category, owed a total of €1.2 billion.

In addition, the liquidators conceded that a small group of Anglo Irish Bank junior bondholders, who rebuffed attempts during the financial crisis to make them share the bank’s losses, will recover the €270 million they are owed.

“The €100 million indicative payment estimate as included in the budgetary forecasts for 2020 would be the payment of the interest due on the principal amount of the unsecured creditor payment owed to the State since February 2013,” a spokesman for the Department of Finance said.

“Other unsecured creditors will be entitled to this payment also on a pro-rata basis. It is important to note that this amount is subject to change, both in quantum and timing and is dependent on the finalisation of the remaining tasks in the liquidation.”

Mr Doherty said that the State having to wait until after the junior bondholders are paid in full before recovering further money “is salt in the wounds” for Irish taxpayers, who committed €34.7 billion to Anglo Irish Bank and INBS before they imploded.

Meanwhile, PwC Ireland partner David Tynan, who was hired by the Department of Finance late last year to assess whether Anglo Irish bank had any equity value when it was nationalised in January 2009, is due to file a draft report “over the coming weeks”, the department spokesman said.

“Should the assessor find value in the transferred shares and extinguished rights, then these funds would be recoverable from the liquidation of IBRC,” he said.

However, it is widely expected Mr Tynan will find that Anglo Irish Bank’s shares were worthless when the bank was seized in January 2015, even though they were changing hands at the time on the stock market at 22c each.

The Government also took over preference shares with a par value of £300 million (€348 million) in Anglo Irish Bank at the time of the nationalisation. They rank ahead of equity holders in terms or recovery.

1 Admission of mistake in Oxford vaccine dose raises doubts over reliability
2 Irish Life fund pays €49m for 94 Dalkey apartments
3 Cliff Taylor: Deal or no deal we are now heading for a hard Brexit
4 Karlin Lillington: How I managed to cut my mobile phone bill by at least half
5 Central Bank rules out changes to mortgage rules during pandemic
6 Fiona Reddan: Who’s afraid of Revolut? Not AIB and BOI it seems
7 Smarter ways to heat your home: Eight of the best modern systems
8 State may face €1bn in compensation in Covid-19 case, Press Up claims
9 Lahinch Golf Club runs out of its own cash after €3m Covid-19 hit
10 Danish retailer Jysk on track to double Irish store numbers by end of 2021
Real news has value SUBSCRIBE

How to ditch your phone and embrace the SIMple life 15:09
Aviva eyes 2020 dividend cut, explores Europe, Asia options 15:01
Pandemic supports will be removed once effective vaccine is rolled out, Government warns 13:23
Cliff Taylor: Deal or no deal we are now heading for a hard Brexit 13:09
Danish retailer Jysk on track to double Irish store numbers by end of 2021 12:49