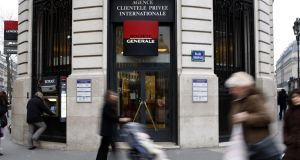 Société Générale set aside about €1.28bn in the second quarter to cover the cost of loans going sour. Photograph: Charles Platiau/Reuters

Société Générale swung to a surprise €1.26 billion loss because of charges at its trading unit, extending a losing streak that’s set to increase pressure on chief executive Frederic Oudea to boost profitability.

The French lender posted almost €1.33 billion in one-off costs following a review of the global markets and investor services business, including a €684 million writedown. That capped a tough period for the bank, during which equities-trading revenue declined 80 per cent after structured products were hit for a second straight quarter.

Mr Oudea is reducing risks and accelerating a transition toward simpler products at the investment bank after an unexpected first-quarter loss underscored volatility of its business model.

Mr Oudea (57) the longest-serving leader of a top European bank, has undertaken the bank’s biggest overhaul in years, as the lender’s board has gotten increasingly concerned about profitability and languishing share prices.

SocGen set aside about €1.28 billion in the second quarter to cover the cost of loans going sour, higher than the €820 million in the first three months. – Bloomberg