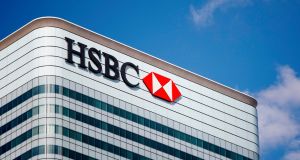 HSBC’s shares fell 4.6 per cent to a nearly twelve-year low as investors digested the scale of the challenge.

HSBC Holdings warned its bad debt charges could blow past a previous estimate to $13 billion this year and said its profits more than halved, as the coronavirus pandemic hammered the bank’s retail and corporate customers worldwide.

The lender warned its capital reserves could deteriorate, its revenues would come under pressure and it faced heightened geopolitical risk as Europe’s biggest bank set out a gloomier than expected outlook for the second half of the year.

HSBC increased its estimate of the total bad debt charges it could take this year to between $8 billion and $13 billion from $7 billion-$11 billion, reflecting worse-than-expected actual losses in the second quarter and expectations of a steeper decline in the economy.

“What we have seen this quarter is quite a sharp shift in economic outlook for the global economy, the famous ‘V’ has got a lot sharper and as a result we have materially increased our provisions,” chief financial officer Ewen Stevenson told Reuters.

HSBC’s shares fell 4.6 per cent to a nearly 12-year low as investors digested the scale of the challenge facing HSBC, as it grapples with a global pandemic, political unrest in its core Hong Kong market, and low interest rates on its lending worldwide.

The bank reported a pre-tax profit of $4.32 billion for the first six months this year, lower than the $5.67 billion average of analysts’ forecasts.

HSBC’s business in Britain has been hit particularly hard, Mr Stevenson said, as it took a $1.5 billion charge against expected credit losses.

HSBC’s results reinforced the trend of lenders across the world increasing their buffers to absorb souring loans at a time when companies – from aviation to retail and hospitality sectors – are reeling from the impact of Covid-19.

The bank’s credit impairment provisions in the first-half soared to $6.9 billion, compared to $1 billion in the same period a year earlier.

Impairment charges included a $1.2 billion write-down on the value of software it owns, mainly in Europe, it said.

While HSBC’s core capital ratio, a key measure of financial strength, rose to 15 per cent at the end of June, the bank warned the metric would likely decline later this year as falling credit ratings hit its risk-weighted asset ratio.

Its revenues fell 9 per cent in the six-month period, as global interest rate cuts and declining market values on assets in investment banking and insurance outweighed higher trading income.

HSBC is continuing to review its long-term dividend policy, CEO Noel Quinn said in a statement.

The bank earlier this year halted pay-outs in response to a regulatory request in Britain, infuriating many of its retail investors who rely on it for income, particularly in Hong Kong.

Quinn told Reuters the bank’s staff headcount has fallen by some 4,000 this year after it restarted a redundancy programme that was put on ice after the coronavirus outbreak.

The bank is aiming to cut costs by 3 per cent this year from that restructuring as well as lower employee spending on travel and other items during the pandemic, he said.

Only a fifth of the around 9,000 staff in its headquarters in London’s Canary Wharf district would be able to return to work in the near term for safety reasons, Quinn told Reuters. – Reuters