Shadow bank: No employees and one function, to sell bonds 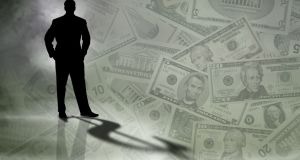 Dublin, home of Europe’s costliest banking meltdown, remains a hub for the sort of opaque operations that contributed to the global financial crisis, threatening risks that policy makers are seeking to stamp out.

Based in a drab office building in Dublin down the road from a pub frequented by Taoiseach Enda Kenny, VPB Funding Ltd had no employees but one function: selling bonds.

In 2013, it issued $225 million of unsecured notes. The proceeds of that sale were funnelled to Vneshprombank Ltd, a Moscow lender whose license was revoked last month when Russian authorities accused management of pilfering its assets and falsifying accounts.

VPB’s notes have plunged to pennies on the dollar. The entanglement of an obscure Dublin firm in the woes of a lender 2,000 miles away shows why Irish officials have begun shining a light on special purpose vehicles (SPVs) like VPB, unregulated entities that borrow on behalf of corporations throughout the world.

Dublin, home of Europe’s costliest banking meltdown, remains a hub for the sort of opaque operations that contributed to the global financial crisis, threatening risks that policy makers are seeking to stamp out. “There’s concern that Irish SPVs are exporting risk to other financial systems around the world and could have contagion effects,’’ said Shaen Corbet, a lecturer in finance at Dublin City University.

SPVs fall under the heading of shadow banking -- lending by entities outside the traditional banking industry. Ireland ranks with China as the biggest centre for nonbank finance firms after the US and the UK, with €2.3 trillion ($2.6 trillion) of assets, based on a survey by the Financial Stability Board (FSB), a group of global regulators.

The nation’s shadow-banking system – including hedge funds, mutual funds and insurers – is more than 10 times the size of the economy. While most of the network falls under the purview of authorities in Ireland or elsewhere, unregulated vehicles – including SPVs – account for an estimated €500 billion, the survey found.

Gareth Murphy, who heads the Irish central bank’s markets- supervision unit, said authorities must increase cooperation in circumstances where a Dublin-based SPV, for example, is linked to “a German bank or a French bank which is prudentially regulated elsewhere.”

“Monitoring of the full financial landscape wasn’t good enough,’’ Murphy, who formerly worked at JPMorgan Chase and the Bank of England, said in an interview.

“One of the lessons of the financial crisis is that a narrow, inwardly focused approach to the pursuit of one’s regulatory mandate really doesn’t work because of the global nature of financial services.”

The scenario has played out before. In 2007, Germany’s Landesbank Sachsen Girozentrale needed a €17 billion emergency credit line from a group of German banks after its Dublin-based SPVs, loaded with toxic assets, were unable to pay their debts.

Irish authorities have begun amassing data on SPVs, and joined last year in an annual survey of shadow banking by the FSB, a group of regulators that monitors the global financial system.

The report examined 26 jurisdictions, though some countries with large shadow-finance operations, such as Luxembourg, didn’t participate.

“It makes sense for the central bank to look for that kind of information just to get an idea of the scale of what’s happening,” said Enda Faughnan, a Dublin-based partner at accounting firm PricewaterhouseCoopers, which helps set up the vehicles.

The collapse of Vneshprombank encapsulates some of the cross-border risks the central bank is seeking to identify. The lender, which held billions of rubles in deposits for some of Russia’s biggest state companies, including oil producer Rosneft OJSC and pipeline operator Transneft OJSC, set up VPB Funding to raise cash for “general corporate purposes’’ and to “diversify its sources of funding,’’ a prospectus shows.

The lender remains under administration by the central bank and a liquidation will follow, said a spokeswoman for Russia’s deposit insurance agency who declined to comment further. Ireland’s central bank said all prospectuses are subject to a “robust approval process,” and that the VPB notes were issued before the US and European Union imposed sanctions on Russia in 2014.

The sale was restricted to institutional investors and use of the proceeds was “clearly disclosed,” it said.

VPB Funding’s notes were quoted at 13 cents on the dollar as of January 19th, according to Trace, the bond-price reporting system of the US financial industry regulatory authority.

Shadow-banking assets have swelled since the financial crisis, and not just in Ireland. Globally, nonbank firms that extend credit had an estimated $36 trillion of assets at the end of 2014, after climbing by an average $1.3 trillion a year since 2011, according to the FSB.

Regulators, concerned that banks may use shadow lending to evade new rules and wary that risks could build up unseen, are trying to map the size of the industry and develop rules for it.

Until late 2015, Irish SPVs had no obligation to alert the central bank to their presence in Dublin or explain their purpose, except where their activities touched on regulated areas. Officials face a challenge in monitoring the SPVs because of the “complexity and opaqueness of their transactions,’’ Ireland’s central bank said in a report last July.

The biggest borrowers through these vehicles are in the US, UK, Germany, France, Italy, Russia and the Netherlands, according to the report.

There are about 2,100 companies in Ireland set up under the legislation that governs SPVs, including some 1,400 since 2010, Finance Minister Michael Noonan said in parliament last month. Even tax authorities don’t know how many assets these firms hold, he said.

“Risks may be building up in the part of the shadow-banking sector for which a statistical breakdown is not readily available,” the European Central Bank, the euro-area’s banking supervisor, said.

Under Irish law, the entities are structured so that transactions deliver little or no taxable profit. Their shares are held by charitable trusts, which can keep their assets and liabilities off the balance sheets of the parties that use them.

Law firms typically set up the trusts and pass along a portion of the fees they generate to charities, according to lawyers who structure them.

VPB Funding is registered at the address of Cafico International, an Irish company that focuses on setting up SPVs for banks, airlines and aircraft-operating lessors. Cafico managing director Rodney O’Rourke didn’t respond to calls, emails and a visit to his offices seeking comment.

Vneshprombank wasn’t alone in making the trip to Dublin. Moscow-based UralSib Bank Ltd, which faced bankruptcy last year until the state orchestrated a takeover by an ally of President Vladimir Putin, is among Russian firms with ties to SPVs, Irish company filings show.

In 2013, another SPV lent $1 billion to Sibur Holding, a chemicals company part-owned by Gennady Timchenko, a billionaire subject to US sanctions, and Kirill Shamalov, who a family acquaintance said last year is Putin’s son-in-law. (Putin has not confirmed the relationship.)

These are the kinds of cross-border links Ireland’s central bank should be worried about, said Corbet, a former commodities trader. “I’d be concerned about the reputational, financial and contagion risks that would be associated should more Russian banks with SPVs in Ireland meet the same fate as Vneshprombank,’’ he said.

“Without data, the central bank is in the dark.’’

1 Player Wills site: Hines and APG to seek permission for 416 homes
2 Developer O’Flynn calls for task force to deal with housing crisis
3 Eir agrees to buy entire share capital of Emerald Tower
4 Pilita Clark: A lot of us are losing it in lockdown – but we really shouldn’t
5 Consumer spending fall may cut indirect tax revenues by up to €6.7bn
6 ‘I’ve so many outgoings with family life . . . it puts manners on you’
7 Pricewatch: Coronavirus has given us four categories of shopper
8 Lobbyists Zoom in to get their message across to Ministers
9 Will remote working mean an end for the corporate HQ?
10 Our warped sense of perspective bodes ill for Ireland's economy
Real news has value SUBSCRIBE