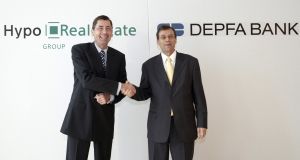 The German state bad bank that took over Depfa Bank five years ago is pressing ahead with preparations to sell the Dublin-based public sector lender next year, even as a leading ratings agency has questioned the strategy, according to industry sources.

Depfa Bank, which nearly collapsed this month 11 years ago as it struggled to finance itself in the wake of Lehman Brothers’ implosion, is planning to hand back hundreds of millions of euro of excess capital to FMS Wertmanagement (FMS-WM), the German bad bank, by the end of December.

FMS-WM was directed by German chancellor Angela Merkel’s government in 2014 to take over Depfa after Berlin scuppered a planned disposal of the business to two US financial companies. FMS-WM has been weighing launching another auction process since at least October 2017.

FMS-WM said three weeks ago that it is considering selling Depfa in 2020, with the company known to have been on the search since August for investment banks to advise how to go about the process. A final decision on whether to proceed with a sale has not yet been made. A spokesman for FMS-WM declined to comment.

However, debt rating firm Standard & Poor’s (S&P) said in a report last week that it thinks FMS-WM may ultimately decide against a sale, in favour of a more “economically rational decision” of speeding up the its wind-down by selling parts of the public infrastructure lender’s portfolio.

“The bank is structurally loss-making largely because it generates minimal net revenues,” S&P said. “Even if an acquirer can heavily reduce the associated costs, the investment return could be very low unless the acquisition is made at a heavy discount to book value.”

In addition, any potential buyer would face higher costs funding its almost €6 billion of assets at higher rates than FMS-WM. This is at a time when the bad bank’s owner, the German government, is able to borrow for at least 30 years in the market rates below zero.

Depfa was bought by Munich-based commercial property bank Hypo Real Estate in 2007, a year before it ran into trouble raising funds. Hypo Real Estate subsequently fell under state ownership and ran an abortive attempt in 2014 to sell Depfa.

Leucadia National, an investment firm run by Wall Street banker Richard Handler, and Massachusetts Mutual Life Insurance had been selected as preferred bidders, after offering as much as €350 million, before the deal was scrapped by the German government, which argued at the time that it could recover more by running down the lender through FMW-WM.

While there may be reason for scepticism about whether there is a real appetite to launch another sale process, a source familiar with the matter said that the German bad bank is keen to sell the business.