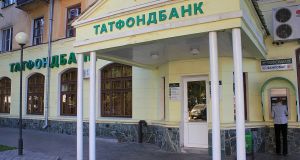 Some $60 million (€56 million) of debt issued by a Dublin-based company for a Russian bank last November has been deemed worthless as the borrower, currently at the centre of a fraud investigation, has been declared bankrupt.

Tatfondbank, based in the city of Kazan, east of Moscow, set up an Irish special-purpose vehicle (SPV) called TFB Finance in 2007, to raise debt for the second-largest bank in the oil-rich Russian republic of Tatarstan.

Most recently, Tatfondbank used TFB to sell $60 million of bonds in November, even though the bank had been in talks at that stage for six months with the Russian central bank, amid regulatory concerns about the group’s financial health.

A prospectus issued by TFB in November, which was approved by the Central Bank of Ireland, contained no references to the bank’s funding issues.

A statement from TFB issued through the Irish Stock Exchange, where the bonds are listed, on Thursday said Tatfondbank had been declared bankrupt by a Tatarstan court on April 10th on foot of a petition from the Central Bank of Russia.

The country’s central bank said last week that Tatfondbank had the equivalent of a €2 billion hole in its balance sheet, more than 20 per cent higher than a previous estimate.

Tatfondbank is the biggest Russian banking collapse since another lender called Vneshprombank, which also had a Dublin funding operation, imploded in January last year and defaulted on its $225 million of bonds.

The development is likely to raise further questions about the role that unregulated Irish SPVs – set up under 1997 laws designed to make the IFSC an attractive “tax neutral” place for banks and companies to raise debt – play in international finance. Global organisations such as the Financial Stability Board and International Monetary Fund have been pressing Irish officials in recent years to look more closely at these activities as they hunt for risks in the world of “shadow banking”, or financial activity that takes place outside the traditional banking sector.

Tatfondbank’s creditors can submit claims to the bankruptcy administrator. However, the trustee for the bondholders, BNY Mellon Corporate Services, said in the statement issued on Thursday that it does not plan to take any action unless investors holding at least €15 million of the notes request in writing that it do so – and that they prefund any steps it takes.

A spokeswoman for the Central Bank in Dublin referred, in response to a request for comment, to a statement it issued to The Irish Times last month, after Tatfondbank had its licence revoked by authorities in Moscow.

The Central Bank said at the time that its practice is to review a prospectus to ensure it contains all disclosures required by EU law. Information on the document, however, is solely the responsibility of the company issuing the bond, it said.