Bruton says disruption of single market in “no one’s interest.” 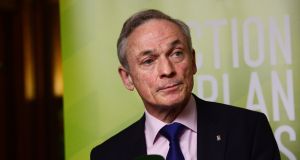 Minister for Education and Skills Richard Bruton says Ireland is not as dependant on UK as we once were. Photograph: Cyril Byrne / THE IRISH TIMES

Minister for Education Richard Bruton has said Ireland will be able to cope with the fallout from the UK decision to leave the European Union.

The former minister for jobs and enterprise Mr Bruton told RTÉ’s Morning Ireland we are not as dependent on the UK as we once were.

Mr Bruton said Ireland has attracted some of the best companies in the world to invest here and while there are “undoubtedly” risks up ahead, the Government will be able to manage them carefully.

Mr Bruton said it is in no one’s interest to see a complete disruption of the Single Market.

He said Ireland wants to see the protection of the Single Market with Britain’s involvement to the highest extent possible with no tariffs imposed on the UK.

The Dáil is being recalled on Monday with TDs set to discuss the implications of the UK exit from the EU.

Meanwhile, the chief executive of IDA Ireland Martin Shanahan has said that Brexit is not something that the agency felt would be good for the Irish economy.

Mr Shanahan told RTÉ’s Morning Ireland he believes there is some upside potential for Ireland but it is too early to size it up and that in the long term it would depend on Britain’s future access to single European market.

Mr Shanahan said Ireland’s certain access to the EU market would be attractive to investors.

Mr Shanahan said the IDA has been in contact with investors and potential investors since the referendum result became known on Friday.

He said he did not believe investors would be making any long term decisions in the next couple of weeks.

Minister for Finance Michael Noonan said the UK is unlikely to secure full access to the European Union’s single market unless it allows unrestricted access to its labour market for EU citizens.

Pro-Brexit British politician Boris Johnson said on Sunday that Britain could secure full access without signing up to free movement elements when it leaves the EU.

As the only EU country with a land border with the United Kingdom, Ireland is likely to play an important role in negotiations.

“From the precedent it doesn’t look as if that option is open, but I can see why he is saying it even though the positions are contradictory, that’s what he campaigned on,” Mr Noonan said on Monday.