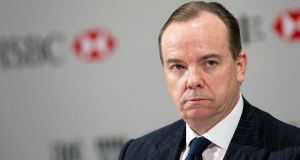 HSBC chief executive Stuart Gulliver was hauled over the coals at a treasury committe meeting in Westminster. Photograph: Jerome Favre/Bloomberg

The rather belated interest being shown by the Public Accounts Committee (PAC) in HSBC’s Swiss banking operation is welcome. It is hard, however, not to connect the PAC’s enthusiasm with the roasting delivered to the HSBC top brass last week by the treasury select committee in the UK.

HSBC chief executive Stuart Gulliver was hauled over the coals about the bank’s Swiss operations’ facilitation of tax evasion by UK citizens, as well as his own use of a Swiss account with HSBC. Chairman Doug Flint also had a torrid few days and eventually offered the sort of grovelling apology that has come to be the norm these situations.

Politicians love such moments and the PAC seems to have scented blood, with chairman John McGuinness saying that he wants to call the same officials who testified before the UK treasury committee. It would be quite a coup if he got Mr Gulliver and Mr Flint over to Dublin for a grilling. Given the HSBC’s small footprint here, they are unlikely to co-operate.

The PAC’s time might be more usefully spent in any case by taking the Revenue Commissioners through the information they have had supplied to them. Of particular interests is their conclusion that they could not bring a prosecution against the bank for helping Irish taxpayers evade tax.

As long as banks can behave in the way that HSBC did with relative impunity – the only risk being reputational damage if they are caught out – the temptation for them to do so remains.

It is not clear if the problems lie with the existing Irish laws or the refusal of the Swiss to co-operate. Either way, there is some some real work for the PAC to do here, if they can resist the temptation to grab the headlines by forcing bankers to make public apologies.