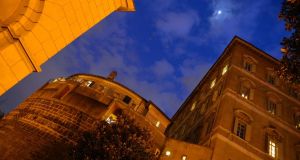 The Vatican Bank. From day one it was clear Pope Francis was no friend of deregulated capitalism, let alone murky financial speculation. Photograph: Gabriel Bouys/AFP/Getty Images

As tourists walk past the Porta Sant’Anna in Rome, just off St Peter’s Square, few pay much attention to the strange-looking, rounded tower that sits just inside the gates of the Holy See. Built by the 15th century humanist pope Nicholas V, the tower looks more like a fortress than a palatial villa, a sort of Martello tower that contrasts starkly with the elegance of Bernini’s famous colonnade in the square.

The point about this Torrione di San Nicolò, of course, is that it is indeed a fortress, a fortress of money. For this tower is today the seat of the Vatican Bank, the Istituto Per le Opere di Religione, otherwise known as the IOR.

There was a time when, for the media at least, the bank was off limits. As of last summer, however, that has changed. And when I turned up at the Porta Sant’Anna recently, the IOR spokesman Markus Wieser and a Vatican gendarme were waiting at the gate.

On request, Wieser had invited me to the bank for what he called a “tour d’horizon”. His basic message was, and is: Look, we have nothing to hide, this is what we are doing now in the Great Clean-Up operation.

To some extent the IOR looks any other bank one might visit: there is a huge counter and several tellers at their posts. In another sense, however, the whole building is very plush, fitted out in a series of rich marbles. Mind you, given that the Torrione di San Nicolò leans up against the side of the Apostolic Palace, this is hardly surprising.

Risk control
Wieser and his colleague Max Hohenberg, however, have something else to show me. In a back room of the bank, in an area that appears off limits to outsiders, several people are huddled round a series of computer screens. These people, some American and some of other nationalities, work for global risk-control group Promontory Financial. Since the summer they have been going through the bank’s current accounts, about 20,000 in all.

When Ernst von Freyberg was appointed as the bank’s new president in mid-February, two weeks before Pope Benedict’s already announced resignation, cynical hacks smelled a rat. The German pope bringing in a new man, and a German too, at the last moment so that he could cover up all the dirty business of recent times at the Vatican Bank.

Ten months later, that not so generous observation looks hopelessly misplaced. If one wanted to point to tangible signs of a possible Vatican Spring, the bank would be one of the places to start.

Senior bankers who know von Freyberg from his days with Freyberg Close Brothers argue that this knight of the Sovereign Military Order of Malta would always have instigated a clean-up operation on his new beat.

From day one it was clear Francis was no friend of deregulated capitalism, let alone murky financial speculation. The pope, who proclaimed he wanted “a church of the poor and for the poor”, was never going to look kindly on an “in-house” institution that, on occasion, had seemed to lend itself to, at best, tax evasion and, at worst, money laundering for organised crime.

Annus horribilis
What is now reasonably clear is that when the two men meet in the Domus Santa Marta (like the pope, Van Freyberg lives in the Vatican’s glorified bed and breakfast), they find themselves on the same page as regards the IOR. After all, in some senses, this has been an annus horribilis for the bank.

It got off to a bad start when the Vatican City’s ATM machines stopped functioning last January. Worse, disgruntled tourists who wanted to visit the Sistine Chapel and the Vatican museums found that tickets could be bought only with cash, since no credit cards were accepted.

Even if the Holy See press office played down the incident, it was a sign that “best practices” from the world outside were invading the Vatican.

What had happened was that German colossus Deutsche Bank, which had managed the Vatican’s ATM and credit card services since 1997, had come under pressure from the Bank of Italy.

Money-laundering controls
Italy’s regulatory bank had for a long time been concerned about financial accountability and inadequate money-laundering controls inside Vatican City. With Deutsche no longer underwriting the banks, its cards and ATM network were rendered useless. The ATM crisis did not last long, however. Within a month a Swiss company, Aduno Group, was running the machines.

The election of Pope Francis was the next critical moment in this momentous year. One of the most hotly debated items at the udienze generali, or cardinals’ meetings, that preceded the conclave was the Vatican Bank. Arriving in Rome, several cardinals had admitted candidly they had been disturbed by media reports of the Vatileaks scandal that, among other things, had made serious allegations of mismanagement at the bank.

The cardinals’ worst fears seemed to be confirmed in June, when Vatican employee Msgr Nunzio Scarano was arrested by Italian investigators on charges that, along with a former secret service agent and a shady financial dealer, he had attempted to illegally “import” €20 million into Italy, using his IOR accounts.

Here we went again: we might as well have been back at the Banco Ambrosiano scandal, which involved Roberto Calvi and archbishop Paul Marcinkus and which was the understandable international media reaction.

This time, however, things were different. Whereas in the Ambrosiano case the Vatican had claimed diplomatic immunity for Marcinkus, Scarano was arrested and imprisoned by Italian investigators (he is currently on house arrest).

In the wake of the scandal, bank director Paolo Cipriani and his deputy, Massimo Tulli, opted to resign (or were forced to) “in the best interests of the bank and the Holy See”.

Two months later the pope issued a motu proprio document that essentially strengthened the monitoring of all Vatican entities (IOR, “treasury ministry” APSA and others) habitually engaged in financial activities.

In early October the Vatican Bank for the first time published its annual report. It recorded that the bank had €6.3 billion in “customers’ assets” and had returned a net profit of €86.6 million in 2012.

What is more, anyone could go and read the report online at the IOR’s website (ior.va).

‘Offshore’ bank onshore
So, then, all is now sweetness and light at the Vatican Bank?

No way. For a start, senior anti-Mafia investigator Nicola Gratteri was not joking when he suggested recently that the Calabrian Mafia, the ‘Ndrangheta, might like to “take out” Pope Francis. Having an “offshore” bank just around the corner and very much onshore has been very convenient for organised crime, Gratteri said.

What seems clear, however, is that a process of radical change is under way at the IOR, a process that should enable the bank get back to its original brief of “serving the global mission of the Catholic Church by safeguarding . . . the patrimony of the Holy See, religious orders and other organisations within the global family of the Catholic Church” as this year’s annual report said.

The fortress has been finally penetrated.