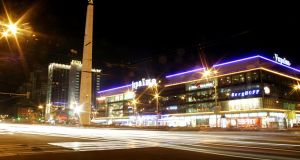 The $50 million, 45,000-square-meter Ukraina shopping centre on Kyiv’s Victory Square, Ukraine, is one of the properties Seán Quinn had an interest in.

A Russian lender that provided banking services to a subsidiary of State-controlled Irish Bank Resolution Corporation has been shut down by regulators there due to its “highly-risky credit policy”.

Until earlier this week, the website of the IBRC’s Moscow subsidiary, LLC Solids, listed Sovereign Bank as its “partner bank” in Russia.

However, in April 2016 the bank had its licence revoked by the Russian Central Bank due to “the real threat to the interests of creditors and depositors”.

The Russian Central Bank said Sovereign conducted a highly-risky credit policy related to the placement of cash in low-quality assets. The regulator said the lender was involved in “conducting doubtful operations for the withdrawal of funds overseas” while its internal controls did not comply with standards to counter money-laundering.

A spokesman for IBRC declined to comment on the relationship between the firm’s subsidiary and Sovereign Bank.

It is understood that the IBRC subsidiary used the Moscow lender as it needed a rouble-denominated bank account to accept payments on leases. The relationship is believed to have been severed more than 12 months ago.

LLC Solids only came to light in a filing made in June by IBRC Investment Recovery Ltd to UK Companies House.

Solids was set up at the same time as the Government increased its effort to regain control of property assets in Russian and Ukraine once owned by former billionaire Seán Quinn.

Quinn, once Ireland’s richest man, had a portfolio of office blocks, shopping malls and warehouses across both Russia and Ukraine. The investments, which were once valued at €500 million, have tumbled to as a little as €125 million.

As part of its efforts IBRC entered into a joint venture with Russian oligarch Mikhail Fridman’s asset recovery group, Alfa A1.

The IBRC venture with Fridman’s A1 ended last year after the Russian company struggled to sell on any of the Quinn assets in the midst of the recession there. IBRC repaid a loan to A1 worth $34 million to end the joint venture.

A1 is believed to have sold only one asset, a DIY hypermarket in Yekaterinburg, while two efforts to auction Q-Park, a logistics parks in Kazan once valued at €50 million, failed to attract a single bid.

The jewel in Quinn’s property empire is the Kutuzoff Tower, a 20-storey Moscow office block, now worth a fraction of its original €140 million value.

However, the property is doing better than many of the other former Quinn assets. The building is home to international and Russian corporates, including Coca-Cola and Dunlop, and has an occupancy of about 80 per cent, according to employees who work there.

IBRC declined to provide details on the latest rent roll for the assets, but in 2012 it was estimated at €35 million.

Other assets include the Univermag shopping mall in the Ukrainian capital Kyiv, which was acquired by the Quinn family for €60 million.

1 Communicorp says ban on Currency journalists strictly business
2 Chinese airline Junayeo Air postpones Dublin-Shanghai flights due to Covid-19
3 How can I view my dead brother’s will if I’m not the executor?
4 Appeals board grants planning for 354 Greystones homes
5 Hibernia founder becomes Doctor Bill Nowlan
6 Fáilte Ireland’s surprise competitor is ... Netflix
7 How do you know if you are wealthy? It’s not straightforward
8 A maverick taking on the Irish whiskey establishment
9 Knock gets visit from world’s largest passenger plane
10 Barclays scraps system monitoring how long staff spent at desks
Real news has value SUBSCRIBE