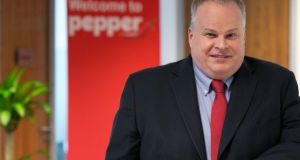 Pepper Ireland chief executive Paul Doddrell. US private equity giant KKR, which is in the process of buying Pepper, has rejected suggestions that it may try to offload the group’s Irish assets.

US private equity giant KKR, which is in the process of buying financial services firm Pepper, has rejected suggestions that it may try to offload the group’s Irish assets in a bid to streamline the business.

KKR said it was fully committed to Pepper’s Irish unit, which employs more than 400 people in Dublin and Shannon, and manages a mixture of legacy debt acquired during the financial crisis and about €150 million of new Irish mortgages.

“Our intention is to further the commitment that Pepper Group has shown to date for its business in Ireland and Europe, its employees and its customers, and help the company fulfil its full growth potential,” a spokeswoman told The Irish Times.

She said the agreement, which has still to be approved by Pepper shareholders, would not result in any material changes to the firm’s Irish operations.

“We are impressed with Pepper’s culture of compliance and high level of service to customers and want to support Pepper Group on the whole,” she said.

“Pepper will keep its name, culture and values, and this agreement brings no changes to Pepper’s Irish operations,” the spokesperson added.

The Sydney-based non-bank lender traditionally specialises in “non-conforming” home loans – those that fail to meet bank criteria for funding – and most of its business is in Australasia. It also manages debt, mainly subprime mortgages, on behalf of third parties.

The group’s Irish arm manages about €18 billion of assets acquired in the immediate aftermath of the financial crisis. More recently, its Irish arm has entered the mortgage market here and, as of last month, had some €150 million worth of home loans either drawn down or in the pipeline.

The London-based Australian banker has links with Ireland via Shamrock Rovers. Mr Dawes and fellow investor Ray Wilson, who owns 50 per cent of the club, are providing the club with an interest-free loan of €1.5 million to invest in a youth academy.

While the loan is due for repayment by 2026 both men have provided guarantees that they will neither pass it on to a third party nor, in the event that the club is unable to come up with the funds in 10 years’ time, force Rovers into examinership or liquidation.

Mr Dawes is a professional investor, who was previously a portfolio manager at UK-listed Ashmore Group. He also owns the Astra Lodge, an upmarket ski resort in Australia’s Victorian Alps.

Pepper’s board have recommended shareholders vote in favour of the KKR deal. Shares in the group were trading at AUS$3.54 at the close of business on Monday, about 20 per cent up since speculation of a deal was first reported by the Australian Financial Review at the end of May.

Buying Pepper will give KKR exposure to the sale of residential mortgages in Australia, whose largest cities have seen prices soar over the past five years.