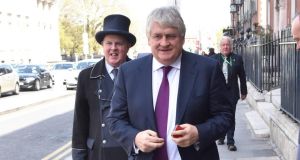 Denis O’Brien has succeeded in getting reporting restrictions imposed covering certain details of a High Court injunction application he is taking against RTÉ over a story concerning his banking relationship with State-owned IBRC.

Michael Cush, counsel for Mr O’Brien, invoked the European Convention on Human Rights in the High Court while arguing that Mr O’Brien was entitled not to have his private banking affairs made public.

Mr O’Brien is seeking an injunction against RTÉ in relation to a story it was originally supposed to broadcast on May 1st. The story is based on a letter Mr O’Brien wrote in October 2013 to Kieran Wallace, the KPMG special liquidator of the State-owned bank, IBRC.

The bank has joined Mr O’Brien in seeking an injunction against RTÉ in a case being heard by Mr Justice Donald Binchy, who imposed a reporting restriction covering details of Mr O’Brien’s IBRC finances.

Mr Cush told the court the focus of the RTÉ report, as conveyed by the broadcaster to Mr O’Brien, was “not so much about his personal finances, but about the governance of IBRC”.

“In a way, he is collateral damage,” said Mr Cush.

The barrister said an “unknown third party” had passed information to RTÉ, breaching Mr O’Brien’s rights. He said the broadcast would cause him “irreparable damage” in his dealings with international banks.

Michael Collins SC, for IBRC, said the information that RTÉ possessed had been “stolen” and some of it was privileged legal advice.