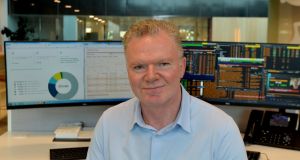 The National Treasury Management Agency (NTMA) declined to comment on Monday on whether Davy will be involved in an auction of Government bonds this week, with the brokerage continuing to grapple with a bond-deal scandal as the debt agency confirmed that it will be raising up to €1.5 billion on Thursday.

Davy is the only Irish-owned firm among the 15 primary dealers of Government bonds recognised by the NTMA. All are obliged as primarily dealers to find buyers for the bonds in Thursday’s bond auction, unless they are stood down.

If the NTMA is to suspend Davy as a primary dealer, it would have to make a decision by midday on Tuesday, according to market sources, as firms involved in the auction will be seeking to firm up orders in advance of the transaction.

The NTMA said on Monday that it plans to sell between €1 billion and €1.5 billion of long-term bonds on Thursday. A spokesman for the NTMA declined to comment on Davy’s potential involvement in the auction.

Sinn Féin finance spokesman Pearse Doherty called on the NTMA and Government to “cut its ties” with the broker.

Inside Politics · Empire, imperialism and Ireland - with prof Jane Ohlmeyer

“I think we’re left in a situation where the State can’t continue to provide reputational cover to an organisation which basically tried to ride this out… which issued a number of internal memos to its staff without acknowledging what had happened, and which only saw resignations of three individuals after public pressure.

“Davy have been caught out red-handed, not only that, but the organisation as an entity has decided not to deal with this. That is unacceptable.

Minister for Public Expenditure and Reform Michael McGrath said on Sunday that the NTMA was awaiting a response from Davy on the debt agency’s concerns about the company’s behaviour after three top figures at Davy resigned the previous day amid the fallout from a Central Bank fine and rebuke over a breach of market rules.

Davy chief executive Brian McKiernan, deputy chairman Kyran McLaughlin and head of bonds Barry Nangle have resigned. The Irish Times reported last week that all three as well as former chief executive Tony Garry and one-time head of institutional equities David Smith were among a group of 16 Davy employees that participated sought to make a profit by taking the other side of a bond deal involving a client in 2014 – without telling him or the firm’s compliance team.

The Central Bank fined Davy and reprimanded the firm strongly last Tuesday for breaching market rules in relation to the deal.

“I know the Minister for Finance will update Cabinet on this matter tomorrow and I understand that the NTMA, who carry out the State’s relationship with Davy are engaging very intensively with the Department of Finance on this matter, so I expect developments and clarity on this in the coming days,” Minister for Higher Education Simon Harris told RTE Radio on Monday morning.

“What happened in Davy has sadly given us an insight into the bad old days that we all hoped were behind us, I think it has rightly repulsed people and I think it has shook confidence at a time when we all need confidence in everything to do with our financial services.”