New York tipped ‘to be big winner’ from Brexit 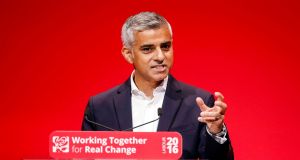 London’s Labour mayor, Sadiq Khan, said failing to maintain access for UK banks to the EU market after Brexit would be an act of “economic sabotage” that would ripple across Britain. Photograph: PA

New York’s financial sector is set to be the big winner from Brexit, according to the chairman of the City of London Corporation’s policy and resources committee.

“It is already apparent that the biggest beneficiaries of any job losses in the UK will be New York,” Mark Boleat, the committee chairman said during a speech in London on Thursday evening. “It is not a question of the numbers of jobs being lost in the UK being matched by jobs gained elsewhere in the EU 27.”

However, Lloyds of London chairman John Nelson told Bloomberg in an interview last week: “There is no way in the EU there is a centre with the infrastructure or regulatory infrastructure to take the role London has. There is only one city in the world that can, and that is New York.”

Speaking at the same event, London’s Labour mayor Sadiq Khan said that failing to maintain access for UK banks to the EU market after Brexit would be an act of “economic sabotage” that would ripple across Britain.

Ireland has its eyes on a number of those institutions although their ultimate fate remains unclear, he said..

The Irish Government is thought to have set its sights on Standard Chartered and Royal Bank of Scotland in particular, while earlier this year IDA Ireland, the foreign investment agency, already pitched to UK and international lenders.

Meanwhile, Morgan Stanley’s president Colm Kelleher, an Irish man, says that if London must be cut off from Europe in any “hard” Brexit, a longer transition period should be agreed.

Writing in today’s Irish Times, he says the City “must not become a bargaining chip in a great game. If that happens, both sides could be losers”.