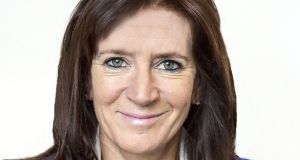 AIB has made three appointments to its management team, the most senior being Triona Ferriter as its chief people officer.

Ms Ferriter will take up her position on January 3rd and replaces Orlagh Hunt who left the bank earlier this year. She will be responsible for AIB’s human resources function and joins from pharma group MSD, where she was executive director of HR for the European Region.

Ms Ferriter will join the bank’s leadership team, which is the most senior executive committee within AIB and operates below the company’s board.

Separately, AIB has appointed Sarah McLaughlin as company secretary, filling a role previously occupied by David O’Callaghan, while Orla Bird has joined the bank as head of communications and engagement.

Ms Bird was head of communications at Ulster Bank for more than 10 years from mid 2006, where she was responsible for devising and implementing communications strategy, reputation management and stakeholder engagement, across the island of Ireland.

She was previously head of PR and media with Meteor Mobile Communications, and also worked for communications consultancy Fleishman Hillard.

Ms McLaughlin has held a variety of positions over the past 13 years in AIB and externally, including roles in finance, company secretariat and private banking.

She took up the position as group company secretary in October, having provided governance and secretariat support and guidance to the board and leadership team since 2012.

These appointments come as AIB readies itself for a possible stock market flotation in the next 18 months, subject to a decision by the State, which owns 99.9 per cent of the bank following its €20.8 billion taxpayer bailout post the financial crash in 2008.

1 How much state pension will I get next year?
2 Am I crazy to consider switching to an Ulster Bank mortgage?
3 Housing crisis here to stay in absence of big rethink, industry warns
4 Avolon appoints Paul Geaney as chief risk officer
5 How long can Government afford to keep State pension age at 66?
6 Up or down – how much is your Local Property Tax this year?
7 PTSB plays down Ulster Bank talk as it sells €1.4bn of loans
8 Irish tech company Asavie acquired by Nasdaq-listed Akamai
9 Budget 2021: fuel prices rise and high-emission cars hit
10 Disposable income in Ireland rose 28% between 2012 and 2019
Real news has value SUBSCRIBE