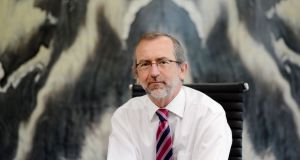 Appian Asset Management has joined forces with Burlington Real Estate to launch a new fund that will seek to invest about €50 million in commercial real estate in Ireland over the next 18 months.

Called the Appian Burlington Property Fund, it plans to invest in a mix of office, retail and industrial units, with about 80 per cent of its activity in greater Dublin and the balance in large regional cities.

Set up in 2003, Appian has €800 million in assets under management and is led by chief executive Patrick Lawless and chairman Kieran McGowan.

Burlington Real Estate was set up in 2012 by former members of the Treasury Holding management team, John Bruder and Niall Kavanagh. It is a property investment and development management company operating across the office, retail, residential and industrial sectors.

It has been involved in transactions valued at more than €750 million since 2013. Burlington manages some assets formerly controlled by Treasury Holdings in Ireland, and assets for a number of third-party clients.

Latest accounts filed for Burlington Real Estate show that it generated fee income of €799,886 in the year to November 18th, 2015.

Appian director Kevin Menton said the fund was designed to produce an income yield to investors of at least 5 per cent a year, together with capital value growth in the medium term. It is targeted at high net worth individuals and pension funds and restricted to qualifying investors and a minimum investment of €100,000.

“We think it will be attractive in a world of no return on cash, which is likely to be the case for the next few years,” Mr Menton told The Irish Times.

Mr Menton said two property deals have already been identified for the new fund and are likely to move to contract stage shortly.

“We believe there is real value to be had in the Dublin suburbs in particular,” Mr Bruder said. “It is increasingly difficult to find attractive opportunities to invest in hotspots like Dublin 2 and Dublin 4, but in the suburbs there are opportunities, which offer a good yield and the potential for significant capital appreciation.”

The Appian Burlington Property Fund was established as a sub-fund of the Appian Investments ICAV (Irish Collective Asset Management Vehicle).

Authorised by the Central Bank of Ireland, the ICAV will have Declan Moylan, a former managing partner of law firm Mason Hayes & Curran, as its chairman.

Commenting on the performance of Appian’s funds this year, Mr Menton said they were “slightly down” due to the fall in value of sterling since the Brexit vote in June.

“We’ve had very strong returns in the past few years and this year will be one of consolidation,” he said. “We’re confident that we can get them to break even [this year].”