Nama had cash balances of €3.4bn at the end of last year 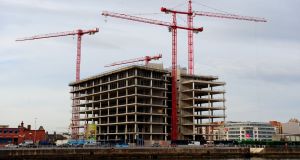 In the Dublin Docklands area, Nama said some 2.5 million sq ft of commercial space is either under construction or has received or sought planning permission. File Picture of Anglo Irish Bank HQ in

The National Asset Management Agency had cash balances of €3.4 billion at the end of 2015, according to a review of last year published by the State body today.

Nama generated €9.1 billion in cash last year, bringing the total since inception in 2010 to €32.7 billion.

Loan and asset sales amounted to €8.5 billion in 2015, bringing the total to €27.2 billion since it began its work. Its main disposals were Project Jewel, which comprised loans associated with developer Joe O’Reilly and included the Dundrum Towncentre, and Project Arrow, which comprised loans with par debt balances of €6.2 billion connected to about 300 debtors and secured against more than 1,800 assets.

Nama redeemed €5.5 billion in senior debt last year, bringing the total to €22.1 billion or 73 per cent of the senior bonds that were originally issued. It is on target to redeem all of its senior debt by 2018.

The agency said it had funded more than 2,300 new homes up to the end of 2015 plus an additional 2,000 social housing units. The number of unfinished housing estates under its control had reduced to 47 from 332 by the end of 2015.

Nama did not publish a profit figure for 2015. However, Nama chairman Frank Daly told an Oireachtas Committee last month that the agency would report a profit of more than €1 billion for 2015 and expects to record a surplus of €2 billion by the time it completes its work on behalf of the State.

In the Dublin Docklands area, Nama said some 2.5 million sq ft of commercial space is either under construction or has received or sought planning permission.

Nama has an interest in 75 per cent of the 22 hectares of development land in the SDZ area of the docklands. This has the capacity to deliver 3.8 million sq ft of commercial space and about 2,000 residential units.

Nama and the Central Bank of Ireland have also agreed to co-fund the establishment of a Commercial Property Statistical System by the Central Statistics Office.