Lehman administrator warns of risks of another financial crisis 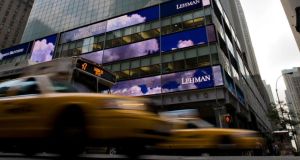 The UK administrator of Lehman Brothers has said the complexity of financial products means ‘there is always a risk’ of another meltdown. Photograph: Daniel Acker/Bloomberg

The UK administrator of collapsed investment bank Lehman Brothers has warned the risks of another financial crisis loom large, and said regulators would still struggle to contain investor panic.

A decade on from the start of the financial crisis, Tony Lomas – the PwC partner in charge of the administration of the bank – said the complexity of financial products means “there is always a risk” of another meltdown.

The failure of the US banking giant became one of the most famous and shocking moments of the crisis, spiralling the credit crunch into full-blown market chaos.

Despite the lessons learned over the past 10 years, Mr Lomas said regulators would still find it hard to stop a firm going bust once investor and market confidence was lost.

It comes as a stark warning on the 10th anniversary of the crisis this week as the UK is still suffering the effects of the aftermath with interest rates remaining at record lows and eye-watering levels of government borrowing.

But he cautioned: “I find it hard to imagine that you can stop that rush of business out the door by various devices that have been introduced over the past six or seven years.” – (PA)