Aegon Ireland sold by parent to Athene for about €180m 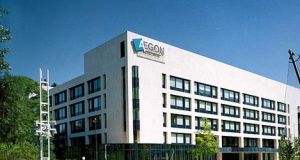 Aegon’s headquarters. The Irish unit employs over 200 people in Dublin

Dutch insurer Aegon has sold its Irish unit to US retirement services firm Athene for about €180 million.

Aegon Ireland, which opened an office in Dublin in 2002, provides wealth management and retirement planning products to over 25,000 customers in the UK and Germany.

Formerly known as Scottish Equitable, the company, which employs over 200 people in Ireland, had assets of about €5.2 billion at the end of June 2017.

The transaction is expected to close by the first quarter of 2018, subject to regulatory approvals.

Aegon said it would take a €125 million hit on the transaction, reflecting that the asset had been valued at a higher level on its own books before the deal.

Ager Bermuda Holding Limited, the parent of Athene and the second largest reinsurance market in the world, said consideration for the transaction will be approximately 81 per cent of the own funds of Aegon Ireland.

Solvency II own funds of the Irish unit were approximately €221 million as of June 30th.

The subsidiary recorded a €6.2 million pretax profit in 2015, the last year for which figures are available, reversing a €6.6 million loss in 2014.

“This transaction is another important step toward our goal of becoming the premier European run-off consolidator and life reinsurance partner,” said Deepak Rajan, executive vice-president of Ager.

“We see significant opportunities with Aegon Ireland. This acquisition gives us a strong platform to accumulate Irish annuities, to create a reinsurance hub in Europe, and to provide services to all Ager group companies, including our existing German operations.

“A presence in Ireland has been part of our strategy from the beginning, and Aegon Ireland is a perfect fit for our growth plans.”

Aegon this week reported first-half underlying profits that rose 23 per cent to €535 million due to lower claims.