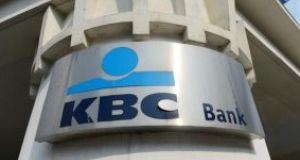 KBC Bank Ireland’s contribution to KBC Group’s net profit surged 213 per cent in the first half of the year to €166 million.

KBC Bank Ireland has begun to make repayments on the €1.4 billion bailout it received from its Belgian parent during the financial crisis.

Speaking to The Irish Times after reporting first-half figures, Wim Verbraeken, chief executive of the Irish unit, said the company had paid a first post-crisis dividend in the “last couple of months” to its Brussels-based parent. He declined to give the amount.

“We hope that, based on our profitability, we can keep that up,” Mr Verbraeken said.

KBC Bank Ireland’s contribution to KBC Group’s net profit surged 213 per cent in the first half of the year to €166 million, driven by the release of bad loan provisions on the back of rising house prices.

The lender freed up €137 million that had previously been set aside to absorb soured loan losses. KBC Group now expects the Irish unit to release between €160 million and €200 million of such provisions for the full year, compared with its previous forecast of €120 million-€160 million.

The net profit figure included the cost of KBC Group funding to the Irish unit. Excluding that, KBC Bank Ireland’s reported profit for the period was €173.1 million.

KBC Group reaffirmed its commitment to Ireland in February, following two years of speculation about its future. It acquired control of the Irish business in 1978 and currently employs about 1,000 people.

The company has signalled its interest in banking and insurance acquisitions in Ireland to expand its footprint, though Mr Verbraeken said the group was not currently working on any potential deals.

The business aims to double its number of customers to 425,000 in the four years to the end of 2020 and hopes that Ireland will be used as a testing ground for new digital applications.

KBC Bank Ireland’s loan-loss provisions release in the first half was largely on the back of rising house prices, with figures published by the Central Statistics Office this week showing that residential property values rose by 11.6 per cent year on year in June, the fastest pace seen in two years.

“The significant impairment releases seen at KBC shows the potential for further writebacks at the other Irish banks, as the rebound in Irish property prices continues to support collateral levels and as non-performing loans continue to experience positive work-out results,” said Owen Callan, an analyst with Investec in Dublin.

Still, 40 per cent of the €12.7 billion mortgage-dominated Irish loan book was classified as impaired at the end of June, down from 45 a year earlier, leaving KBC with ostensibly the highest level of such loans among Irish retail banks. However, KBC Bank Ireland applies the strictest classification of non-performing loans in the State and the level of loans in arrears is much lower.

New mortgage lending at the Irish bank increased by 29 per cent year on year to €333 million in the first half, as the group targets switchers as well as first-time buyers and people who are moving homes.

Mr Callan noted that an increase in KBC Bank Ireland’s total net mortgages to €9.74 billion at the end of June from €9.66 billion three months earlier “marks an inflection point of the Irish arm, after the significant deleveraging seen in recent years”.