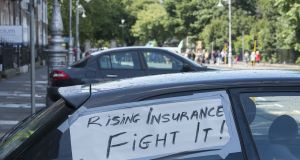 Claims litigated through the courts are just one part of the overall picture concerning motor settlements.

The legal bill for motor insurance claims that were settled in the courts between 2015 and 2018 amounted to just under €500 million, The Irish Times has learned.

The figure is based on data used by the Central Bank of Ireland for its Private Motor Insurance Report, which was published on Monday and shone a light on settlement costs here over the past decade.

According to the report, the average compensation in litigated settlements over the four-year period was €45,390 while average legal costs amounted to €23,031, with claims taking, on average, 4.4 years to be paid in full.

Data held by the Central Bank, but not published in the report, shows that the number of claimants going through the courts was 17,719 over this period. This gives a figure for legal costs of just more than €408 million.

However, this represents only 83 per cent market coverage, as per the data given to the regulator by the 20 companies who provide motor cover here. When adjusted for the entire market, the total legal bill comes to €491.7 million.

Claims litigated through the courts are just one part of the overall picture around motor settlements.

Settlements agreed between insurers also involved legal costs, which averaged €1,385, according to the report. With 30,189 claimants settling through this channel, the legal bill would be €51.4 million when adjusted for the entire market.

Average legal costs were much lower for settlements made via the Personal Injuries Assessment Board (PIAB) – at €753. With 9,307 claimants going through PIAB, this gave rise to an adjusted legal bill of €8.4 million.

That gives a total bill for legal costs for all of the categories of settlement at just over €551 million.

These figures highlight the lucrative nature of litigation for motor insurance claims. In a statement published in the wake of the Central Bank’s report, industry group Insurance Ireland noted that legal fees amounted to 63 per cent of compensation in litigated cases under €100,000.

It said this was a “significant concern and underlines the need for these costs to be tackled”.

Some 53 per cent of cases were settled directly by the insurers in the four-year period in the Central Bank’s report. This compared with 16 per cent via PIAB, an independent State body, and 31 per cent through litigation in the courts.

1 Solar panels: Are they worth the investment?
2 Eason has acquired rival Dubray Books for undisclosed sum
3 Bank leaked my loan request to family who tried to rip me off
4 When the Chemistry no longer works – the closing of a leading Irish ad agency
5 Longview seeks permission for 753 homes in Cork’s outskirts
6 Ryanair and Aer Lingus monitor impact of coronavirus on travel to Italy
7 Up to 5,000 engineering jobs expected to be created in 2020
8 Revolut valued at $5.5bn after latest fundraising
9 Stock markets have steadied after Monday’s dramatic falls
10 Bank’s planning of bonuses smacks of fantasy
Real news has value SUBSCRIBE